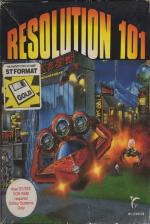 Shrouded in mystery ever since Logotron first showed off demos late last year, Resolution 101 boasts the fastest 3D routines ever seen on the ST. Speed freak Mark Higham dons his helmet, climbs into his skimmer and signs up for the war on drugs. But is this baby really any more than just another good-looking ride?

Games such as Populous, Midwinter, Gravity and Space Ace are constantly proving that the 16-bit arena in general - and the ST in particular - is where it's all happening. Just when you see a game you believe can't be bettered, another comes along to prove you wrong.

Programmers are constantly surpassing past achievements. A few years ago it was games like Virus and Falcon which were considered state-of-the-art, but now they're achaic and forgotten. They're certainly not in the same league as Resolution 101.

Defying any neat categorisation, Resolution 101 is an all-action romp in which you spend your time squashing iniquitous drug barons. Set in a city, the objective is to pick up parcels of drugs and blast the drug runners from the skies. However, this is no excuse for an unremitting attack on the local bovver boys. For you play the role of a convicted criminal suddenly offered the chance of freedom because of a new article of law - Resolution 101 (hence I suppose, the title: Depeche Mode have a lot to answer for!).

To earn your freedom you must blast the drug runners and pick up their illicit contraband before it can be used for illegal purposes.

The city consists of houses and shops, represented as 3D rectangular blocks. Using either the mouse or joystick to control your direction and speed, you steer around the city in search of the drug runners. At the start of the game large areas are out of bounds, but as you work your way through the levels, more areas become accessible and the game steadily gets more difficult.

The city is divided into four quadrants with each controlled by master criminals, who fly above the city roads in distinctive red/orange craft making city-wide drug runs and setting up seals for illegal consignments of contraband. As with any self-respecting drug ring, it's not Mr. Big who gets caught with the nasties. Instead, he has a series of minor criminals working for him who transport the contraband around the city. Your duty is to follow them and do your utmost to steal the drugs. The contraband is represented in the game as coloured balls. Hit a criminal carrying drugs and he drops his stash: quickly you drive over it to pick it up before anyone else does.

Occasionally the drug runners drop contraband from the skies. In the first few levels of the game this is confined to standard red packages which are inert and can easily be picked up, but in later levels they're more of a problem. Booby-trapped bombs (represented as black and grey consignments) are the most dangerous and can kill you on contact. If you see a consignment like this, wait for another drug runner to come and pick it up. Now blast that runner, and when he drops the consignment it's transformed into a safe package. Bonus packages are represented as yellow balls. Collect four and you gain an extra life.

A score on the dashboard keeps you informed of how much contraband has to be collected before you can go after the drug barons. The barons are protected by a host of intelligent bodyguards who roam all over the city pursuing their dastardly deeds. If you try to attack their leader, however, they quickly return, lasers ablaze. They usually ignore the occasional potshot from you, but start making serious attempts to wipe out the leader and they descend on you like a plague of armed locusts. If you succeed in killing the leader, all the bodyguards turn on you. The answer is therefore gradually to take out the bodyguards until only the leader remains - he's easy prey when he's in such a vulnerable position. In later levels the bodyguards themselves have craft assigned to protect them - so you can be in for some major headaches!

To move around the city you have a skimmer which comes equipped with a whole host of expert gadgetry designed to make your job easier. In the beginning, the weapons system and the engine type are fairly basic models, but by picking up drugs and making money, you can visit shops located in the city to buy extra supplies.

The craft comes equipped with a shield to absorb hits from the drug-bearing enemy craft. If you're attacked or crash into buildings, your shield starts to deplete. It can be restored at the shop with a shield booster pack, but if you allow it to sink too low, you lose a life. If the shield is functioning at less than quarter strength, you may lose one of your dashboard gadgets. This can mean kissing goodbye to your radar, shield gauge, pointer or map - any of which causes massive probs and may be missed so much that you lose a life. Once lost, the gadgets can be replaced at the shop - always provided you have found enough contraband to give you the necessary cash, of course!

Start sweeping the mouse from side to side and the first thing to grab you is the speed of response: this game isn't fast, it's bleedin' supersonic! All the action is played through a small window, your view out of the skimmer's windscreen. The landscape and buildings are represented as flat areas of colour, with planes effectively shaded to give the impression of depth. When you start steering your craft through these buildings they hurtle towards you at lightning speeds - keeping the action immensely challenging.

With a host of extra touches such as the digitised faces on your dashboard monitor and the frustrating enemy craft, you are convinced that enormous effort has gone into giving Resolution 101 a polished and sophisticated feel.

Sound wasn't available in the version we reviewed (last minute problems inevitable in finishing such a vast project - hence the silent Cover Disk demo), but spot effects and a musical track using the ST's sound chip are promised.

Until now Logotron - or Millennium, as we must now learn to call them - haven't ever produced a really big game. They've had success with Eye Of Horus and Kid Gloves, of course, but nothing which you could say, with your hand on your heart, that was really state-of-the-art. Resolution 101 has put them right up there with the big boys.

Although Resolution 101 is aimed at the action enthusiast, it defies any standard game category - and that's part of the secret of its success. It's utterly original in appearance, scenario and gameplay. Couple this with breathtakingly super-fast 3D routines and you have something which is not only uniquely enticing but also enormously, sickeningly addictive.

Marry these factors with a huge amount of variation between levels and Resolution 101 is without doubt one of the games of the year. Don't miss out!

Although Resolution 101 is aimed at the action enthusiast, it defies any standard game category - and that's part of the secret of its success. It's utterly original in appearance, scenario and gameplay.