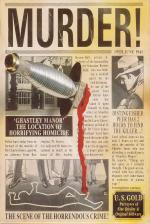 Get those grey cells out of retirement and let them loose on a bizarre murder investigation. Someone at your party has killed one of the other guests and you've got two hours to go through your Hercules Poirot routine and find the murderer. This Agatha Christie style question and answer investigation follows CRL's Herewith The Clues which trod similar ground last month.

Load up the game and use the face designer to change the appearance of your sleuth. If you don't go for the mustachioed Poirot look, you can always go for a shabby loose-eyed Colombo or squeaky clean Ellery Queen.

After the photo-fit session you're through to the real murder. The game is played with a 3D isometric view of the room you're standing in. At the start of a game this is the room where the murder has occurred. You're next to a dead body and a witness and if you want to be a first-grade PI you better interrogate the witness to glean all the information you can.

The objective is to work out who committed the crime and with what weapon. Some murders have clues suggesting how the victim was killed; others don't. For example, you can be told that the victim was stabbed, but there are so many knives scattered around that this actually means very little.

Murder is played in the rooms of a house with four floors. At any moment you can call up a map to look at the location of the rooms, but you cannot search the rooms for evidence or characters unless you actually walk into them.

As you meet suspects you can interrogate them by clicking on them and selecting the question option. Using a series of icons you can ask delicate questions such as, "What was the relationship between you and the deceased?" or the more direct, "What do you know about the palette knife?" or even the B-movie classic, "What do you know about Dr. Forbes and the garage?" Since you can only ask a limited number of questions, it would be far quicker and easier if these could be selected from a list of possible options.

Many characters are carrying suspicious items such as guns or handkerchiefs that provide crucial information. If the fingerprints were wiped clean in the murder room, the culprit isn't carrying that handkerchief for his nasal probs. Useful information can be saved in a notebook and called up later.

Besides meeting suspects, you can also stumble onto evidence. If you wish you can check it for fingerprints and save these into a jotter. If you're satisfied that the fingerprints match others you've found then you can hold the item as exhibit A - the suspected murder weapon.

When you think you know the murderer and weapon, click on a pair of handcuffs. You're then told whether you deduced correctly or not. If you screwed up then it's on to one of the other three million murders to be solved. If you got it right, then pause for a celebratory glass of champers - just remember to check it's not poisoned!

A 1930s mis-en-scene reinforces the old-fashioned murder mystery ambiance. Obviously those were the only days when murderers were so full of stealth that they conveniently stuck around the scene of the crime to get caught. To recreate this period effect the interior graphics are all monochrome. It's unfortunate that a sepia tint wasn't used because black and white looks incredibly drab and boring.

Apart from this crucial criticism, the visuals are ultra-exciting. Murder employs a face creation utility which supplies different features for all the characters used in each game. If you've ever toyed with Fun Face (STF Cover Disk 2) you'll know exactly how enjoyable it is creating ugly mutants by playing genetic havoc with eyebrows, noses, glasses and beards.

Aside from a sampled intro tune with loud screams there are only occasional spot effects which add little to the atmosphere.

Good graphics, a variety of rooms, well-hidden evidence and a mountain of red-herrings make this a fatally addictive murder game. Unfortunately the frustrating way you have to construct questions means it's sheer bloody murder interrogating anyone.

However, with three million murders waiting to be solved, which is more on the scale of Pol Pot than Agatha Christie, you can be sure you'll be solving homicides in every spare moment.

Good graphics, a variety of rooms, well-hidden evidence and a mountain of red-herrings make this a fatally addictive murder game.