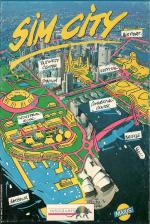 You've played flight sims that take you on a hellish, gut-wrenching journey through the skies. Turbo-charged racing sims that make you afraid to step off the pavement. Submarine sims that give you the shakes when you think of taking a bath.

Now comes the city simulator that's going to make you retire to the countryside. With its conspicuous lack of heat-seeking missiles and laser-hungry aliens, you could be forgiven for thinking the idea is so far-fetched it couldn't possibly be a success. Think again, and read on.

Sim City puts you in the role of mayor. Your job is to build up a city, satisfy the whims of a whinging public and keep your finances in check. The game is an amazingly addictive challenge on this level, but you can have even more fun by inflicting disasters on the land such as earthquakes or flooding. This leaves you with the major headache of trying to recover from the disaster. Alternatively, the game has eight preset scenarios which give you specific objectives such as restoring an earthquake-torn San Francisco to prosperity within five years.

At the start of a fresh game you are allocated a budget - in easy mode this is $20,000, less in harder games. With this cash you need to place residential, industrial and commercial zones strategically around the map. All of these require an electricity supply, so you need to buy a power plant. Position the power plant too close to the residential area and people don't want to move them, move it too far away and you can spend a fortune buying power cables to link it to their houses. When these sites are linked to power, people begin to move in.

At the start of a game it's best to position the zones close together so the residents can get to work fairly easily. Roads are then laid to improve access.

To encourage people to move into your city you need to set low tax rates, but this doesn't generate much income. At the start of a game keep a tight rein on your expenditure; buy only essential items until the city has established itself. As the city grows larger you can increase the taxes to pay for additional facilities such as a port or an airport to encouraging trade.

As the city develops, you begin to realise the problems of planning. Suddenly your aesthetic layout suffers from congested roads and unemployment. The answer may be to lay an expensive railway line or to demolish property to make way for new road networks, but be careful, make a few mistakes and you can end up with even more nightmares. Crime and fire outbreaks require a police station and fire brigade, and since these are on-going services they require perpetual funding, eating up a large chunk of your municipal budget.

Just surviving on a year-to-year basis can be a serious headache, but when disasters happen things really heat up. Floods knock out coastal regions and earthquakes can result in fire sweeping across the city. With housing devastated, people begin to move away, lowering your annual income and making it hard to sustain growth. Make repairs quickly - or face ruin.

Sim City is played using GEM windows, icons and drop-down menus. Using the cursor keys or the window slider bars, you can view the entire map. Icons down the left of the screen enable you to select the types of property to position across the map.

The graphics and sound are nothing to rave about. Graphics have a distinctly 8-bit look about them, but despite being chunky and poorly detailed, they serve their purpose. Different graphics represent increased activity as your residential areas swell and your industrial zones start pumping out black smoke. There are especially effective in inner city areas where activity is concentrated.

Sound is limited to occasional spot effects such as the noise of a bulldozer flattening ground. They serve no useful purpose and by switching them off the game runs slightly faster.

The Format Guide To Building

Your first task is to position some housing. Select an area close to the shoreline, because land values are greater here and the property will generate more income later. The flashing power sign means the zone has no electricity.

Place a power station in a central area, far from the residential zone. In this way, power lines can be taken to other areas of the city as the development grows.

The graph indicates which areas of the city need to be established. At this point you need more housing and industrial sites. Place an industrial zone outside the main residential areas, remembering to take a power line out to them. Industrial zones generate pollution which scares away residents.

Now position a commercial zone close to the residential area, providing more employment for the people. With the main building blocks established, begin to build a roadway for the people to move around.

Roads quickly become congested as the city grows so it's imperative you leave lots of space for road improvements later. Alternatively, you needn't lay roads at all, you could use railway line instead, though it's more expensive.

As you can see, some of the residential zones look less than appealing now. Their rateable value has declined so position a few parks in the area.

You've established the important areas of the city so now set the kind of budget likely to prompt people to come to your development. With $20,000 under your belt you can afford to be generous - for the moment.

Sit back and watch for a while as the people come in and move around the land.

It's unfortunate the programmers of Sim City and Imperium didn't get together. Imperium designer Matt Stibbe levelled severe criticism at the ST's GEM environment and devised his own routines to handle windows and menus.

The only serious criticism of Sim City is that it keeps the GEM environment, warts and all. The result is that windows appear slowly and mapping out roads and railways is frustratingly slow. Fortunately you get so involved int he game that you cease to notice these problems after a while.

Sim City gives you hours of pleasure discovering the nightmare intricacy of urban planning. When you think you've got it down to a fine art, just try invoking a few natural disasters and see how hard it is to recover.

The unusual style of Sim City and the ease with which it can be understood are going to make it a hit with every self-respecting power-hungry gamester. Even when you manage to tear yourself away from it, you crawl into bed dreaming about municipal budgets and road building schemes. Sim City is so addictive, it's frightening. There ought to be a law against it - but until there is, get building!

This is so addictive, it's frightening. Even when you manage to tear yourself away from it, you crawl into bed dreaming about municipal budgets and road building schemes.