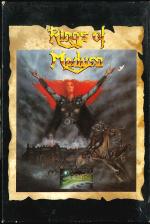 Fortified by inventive programming skills, recent releases have been reaching new heights of originality. Last month Iron Lord scored high marks for its novel angle on the traditional adventure game. This month Gravity proves to be one of the most arresting games in aeons. And now Rings Of Medusa marries elements of strategy and action to produce an exciting new adventure format.

You assume the role of a young prince and must prevent the Goddess Medusa ravaging your kingdom. Since she has unearthly powers, you can't just wander into the green pastureland with a sub-machine gun and blast her brains out. You have to locate five rings sprinkled across the landscape and piece them together in a temple. This forces Medusa to fight you. The conflict makes up the end sequence only, so the real objective of the game is to unearth the five hidden rings.

Unfortunately, you don't begin the game in a very healthy position. You need money to build up an army and there are several ways to get it: you can trade with other characters, attack caravans, raid towns, gamble in the casino (if you can find it) or search out raw materials.

Medusa is split into three parts: there's the rural landscape where the mouse-driven character moves through fields and forest, a town section where wealth and arms are accumulated and the combat area where fight sequences take place.

In the town, you need to visit the harbour, store, bank, castle and park in your drive to amass money. Certain cities are abundant in specific items; so, for example, if a city spends all its time producing apples, apples will be cheaper here than anywhere else. The bank is enormously useful since you can borrow money (at a high interest rate). You need to pay the money back otherwise traders in the area won't deal with you. Take a trip to the park to buy soldiers. There are several types of troops, each with different fighting skills, including cavalry, artillery, dragonriders, wizards and archers.

You're goaded into fights at various points of the game, usually by bumping into another character. Unfortunately, you don't know the size of the army you're confronting, but you do have the option of sending out scouts to discover what you can about your opposition.

The battles themselves aren't graphically exciting; strategic interest lies instead in your judgement of which troops to use. The victor collects rings or money and this is how you'll eventually collect the five rings you need.

The map and the towns are represented as colourful and clearly drawn graphic images, but this is the extent of the game's visual appeal. Sprites are little more than a few points high because it's more important to squeeze a large portion of the map on screen. But the biggest frustrations is the time it takes to move between two screens of the map.

For some reason, it takes as much as a couple of seconds to move between screens, even though no disk accesses are made.

No spot effects are used but as tune plays constantly in the background, sounding atmospheric at first, but soon driving you to reach for the volume control.

For the first few hours, Medusa is breathlessly entertaining. Sending your hero around the map and looking into the wide range of towns is frighteningly addictive. Since you can't progress far without bumping into an army, it stays that way, at least until you discover the first few rings.

Without the variety of graphics and sound, however, Medusa soon loses its appeal. We've compared it to Iron Lord but the latter's programmers recognised this problem and developed the game beyond the limitations of the map sequence. With nothing more in Medusa you're left feeling you only have half a challenge.

For the first few hours, Medusa is breathlessly entertaining. But it doesn't have Iron Lord's variety of graphics and sound, it soon loses its appeal.