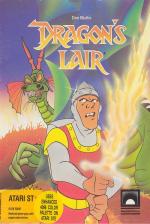 The first Readysoft release was two months ago when Space Ace hit the ST. Its arrival was a huge surprise not just because the graphics were out of this world, but because Space Ace was supposed to be the sequel to another Don Bluth game called Dragon's Lair. At that time, despite a ridiculously long wait, Dragon's Lair still hadn't breen released. Now it's finally here, and sporting the same quality graphics as Space Ace, Readysoft have a lot to shout about.

The aim of the game is to control Dirk the Daring as he charges through a series of levels in a bid to rescue the beautiful maiden (yawn!) waiting at the end. When the game starts, you're starting at the castle gates and your first task is to cross the bridge. You need to make the correct joystick moves at the right time, in a similar fashion to Space Ace, to escape to the end of the level.

In the first scene, this entails an upward flick when Dirk falls through the hole in the bridge. Hardly dramatic interactive stuff, but if you're looking for a demo of your ST's abilities, it's unbeatable.

Dragon's Lair lacks Space Ace's polished finish. For a start, fewer joystick movements are required to win the day, and more importantly, the animation isn't as spectacular. Fewer frames are used, so it doesn't have nearly the same visual impact. Fortunately the Save Game option has been maintained which is a great help in your bid to progress.

The game can be played on any ST and is arranged on six double-sided disks. Due to the formatting of the disks, single-sided owners lose out and only get to play half of the sequences.

Dragon's Lair has little going for it as far as playability is concerned. Where it does rate highly is in the effects department; the soundtrack is superb and the visuals are so smooth and detailed that it's like watching a Disney cartoon.

Unfortunately it's a repetitive cartoon. At least in Space Ace, each screen was different from the last, but the only difference between some levels in Dragon's Lair is that one is a mirror image of the other, and the moves required to survive are reversed!

Dragon's Lair makes a wonderful demo, but there's so little interaction that it doesn't stand up as a game. The programmers should strip out the tedious joystick movements and release it as a cartoon. It's an appalling game and at such an inflated price, it's just not worth the money. Readysoft have Dragon's Lair II scheduled for release at Christmas, but before they design another sprite, they had better improve their gameplay.