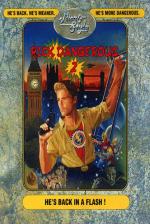 The world's under attack, spaceships have landed in Hyde Park, and there's only one man who can help. Mark Higham dons cap 'n cape, performs the famous Superhero underpants switch and flies to the rescue of an alien-infested London...

Rick Dangerous II reclaims the much-neglected formula of arcade games. Boasting hosts of pretty graphics, a variety of thrilling levels and a threadbare plot, it brings you face to face with your worst nightmares. If it sounds familiar then you've probably played Rick Dangerous I, but the follow-up claims (predictably) to be bigger, brighter, bouncier, and offer oh-so-much-more of everything.

The first and most radical of the improvements hits you when you load up. When the original Rick Dangerous was released in September '89, the programmers made the big mistake of making it so tough that it was impossible to get past level two. Microprose recently released a new version enabling you to play without working through the levels in sequence, and Rick Dangerous II uses the same idea. Each time you start the game you're presented with a menu from which to select any of the five levels available.

The scrolling has vastly improved; all levels scroll horizontally or vertically and you're not forced to take any particular route. At many points you can proceed in two directions; one may lead to a bonus room while the other leads to sweat-inducing problems.

It's possible to double-back on your route giving you scope to explore various options when confronted with a problem. For example, you can climb up a ladder only to realise that certain steps activate a laser and bolts of lightning are suddenly searing your britches. The answer may well be to jump off the ladder before the lasers start up.

At one point your path is blocked by a massive brick in a low-ceilinged corridor. You can crouch down and crawl along the corridor, but you can't demolish the block because you can't use any of your weapons when you're crouching. The answer is to stand up straight (like a man) before you step into the corridor and lob a grenade to get rid off the block.

When it just seems impossible to move in any direction, the answer is often to track down a switch in the wall. By activating these switches you can turn off lasers or call lifts to spirit you away.

Rick is armed with a number of useful weapons and with the right joystick moves you can throw grenades, fire a laser or use your fists. Each of these are essential if you're going to emerge victorious.

The levels become increasingly difficult to complete; you can just about get through the first level without ever needing to use a grenade, but as you advance you can't even scratch your head without having to lob a few grenades to buy you a moment's peace.

In level one flashing arrows point out buttons on the wall, making your task much easier, but as you proceed through the levels the buttons are hidden, leaving you to puzzle over how to progress.

The game has subtly improved in the graphics department. At the start of each level is a short, animated intro sequence explaining how Rick happened to get to that level. Once you're into the real guts of the game, you can trot along hiding behind steel girders and the undergrowth.

The scrolling is a little peculiar. As you reach the end of a screen and move into the next, the entire display leaps forward one screen placing you at the start of the new one. This differs from the up and down movement where the scrolling is smooth.

Sprites are miniscule compared to some of the monolithic monsters we've seen recently on the ST. Rick himself is little more than sixteen pixels square, tiny compared to the 320-pixel width of the screen. This is just large enough to keep the game absorbing, which is fortunate because the later levels do take you to some visually stunning settings.

In many of the scenes there are neat additional effects such as twinkling stars, vicious lasers, sparks, spikes and falling masonry - all of which are well-defined and highly atmospheric.

Admit it, Rick Dangerous I had you glued to your seat. Well, Rick Dangerous II is going to do the same thing... for twice as long. The problems are more challenging and the options to solve them far wider. Making progress can be frustrating at first, but you quickly become experienced at throwing laser bolts and tossing grenades.

If you're excited by innovative games or demanding strategies then this game is not for you. Despite the recent trend towards new and original games there are still many gamesters who want nothing more than straightforward challenging arcade action and Rick Dangerous admirably fulfills that need. If you want some light relief and miss that arcade addiction, step into Rick's shoes and get ready for action!