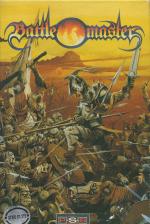 Mention elves and dwarves to a seasoned gamester and you get a big yawn in response. Battlemaster might conjure up that same old scenario but offers some bizarre variations on the theme. Fearless Mark "the orc-hater" Higham picks up his sword and bravely goes where no games addict has gone before...

In Turbo OutRun, you could hit your jets and disappear into the sunset, in Gravity you could climb aboard a spaceship and escape Earth's problems, and in Thunderstrike life was just a violent TV game. Battlemaster offers no chance of escape. In this game, you need to use your bare hands to fight for survival and beat orcs, elves and dwarves to a pulp.

Your role in this nightmare is to track down and defeat the four kinds in the four racial capitals (orcs, elves, dwarves and humans) and deliver their crowns to the watcher's tower. The kings are located in random places around the map. Before you discover them you need to overcome a barrage of enemies and discover ways past a host of puzzles.

Battlemaster is split into a number of scenarios seen on the map as villages, castles, mines and wilderness. Each of these scenarios is populated by one of the four races or by monsters. In each scenario there's an objective. Often it's to solve a puzzle such as tracking down the key to a gate, nbut it can also be to find specific objects like food or weapons.

Whatever the objective, you have to work it out for yourself: there's no help provided. For example, when the game begins you're placed in a random position on the map depending on the leader you chose. In one of these positions, you're outside the walls of a castle. You can't venture into the mysterious castle because you don't have a key to take you through the front gate. You wander up the map until you stumble across the key. Fortunately it's unprotected, but it's common to find monsters standing over the top of items just waiting to singe your eyebrows.

When you've got your sticky fingers on the key you run back to the castle and charge straight through the open gates. A legion of enemies immediately descends on you and you need to shoot the whole miserable bunch. When they're all dead you can pick up the treasure lurking inside and proceed up the map to the next tricky encounter.

Fortunately, you don't take on this major task alone; you have the support of a small band of men. This is where the strategy element comes into play. You control the men using a set of icons at the side of the main playing area. You can, for example, choose to lead from the front, bring up the rear or wander off on your own, and you can make the men walk abreast or in single file.

Positioning the men is very important because in the correct formation they can easily wipe out monsters. The men aren't just mindless brutes though. If comrades die in battle their morale starts to plummet. As you wander the terrain you find that many of them start lagging behind and the only way to re-group them is to hit the Rally icon. Alternatively, if you're performing well and racing through the scenarios in no time, morale is high and your men eagerly run off ahead looking for people to attack. Again, Rally can be used to call them all back.

You don't have to plunge headlong into battle all the time. Provided you're not in territory occupied by monsters (beasts other than the four races), you have the option to Parley. Click on the Parley icon and you're presented with three options - buy troops, buy free passage or buy objects. You can only buy troops if you're in a scenario occupied by the same race as yourself.

Buying yourself free passage is acceptable in other cases, but you need to have enough money to be able to do it. Alternatively you can buy items for the local population. All the end of a battle this icon changes into a world map to enable you to select another scenario to visit.

If you played last month's Cover Disk demo you already know the graphics aren't going to make you dance with joy. Scrolling is jerky and the backdrops are tedious. Wake up in the back row!

The game is played with tiny sprites and it's often difficult to work out whether your characters are engaged in ferocious battle or brazenly making babies.

You can see exactly where you're going because a red arrow hovers over your leader's head. This is helpful because the entire team can occasionally disappear behind boulders or houses. All you can see then is the red arrow jauntily moving around.

Sampled noises give you the impression of strenuous fighting. Each time one of your team is maliciously sliced in two by a pernicious enemy, you're treated to a piercing scream before he disappears in a puff of smoke.

This is a game all about developing successful strategies. Overlook the forgettable graphics, they're good enough to do their job. What's important is to look at how the game plays.

Battlemaster might not be particularly original - battling against orcs, elves, dwarves and mosnters has been done thousands of times before - but it takes a welcome detour from the well-trodden adventure path.

The way you lead your team of men through their bloody campaign is novel. It isn't clever enough to make this a classic, but it's certainly inspiring. Different formations can improve your attacks and you can recruit new men to replace those who've ended up like a jar of ketchup.

Even if your plight is hopeless, there may still be a way of winning when you reach the next villager. It's this formula of heart-racing action and innovative strategy that keeps you playing Battlemaster over and over and over again.