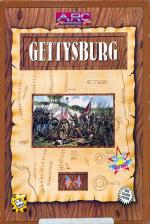 The Turcan wargames are something of a legend in the wargaming field, so detailed and carefully planned that they're among the few war simulations which actually feel like reality. The first in the series was Borodino, quickly followed by Waterloo and Armada. Now comes the much-overdue Gettysburg which places you in the role of either General Lee or General Meade during the 1863 battle at Gettysburg in the deep American south.

The beauty of Gettysburg and the other Turcan wargames is the way they put you in the shoes of your chosen general. You see the landscape as a 3D view through his eyes; but the realism doesn't stop there. To move troops around you cannot simply select a location for them to visit but must instead pass commands to messengers who carry them to the generals, who in turn pass them onto the troops. Although this means it can take a long time for your orders to work their way through to the front line, it also means that Generals take the initiative to act under their own steam and block holes in their defence.

The game is played in turns with each turn occupying 30 minutes of battle time. Within this, you pass orders on to your generals, request reprots and keep an eye on the movement of troops on the game terrain. Orders are made up of carefully structured sentences, and ample examples are provided in the playing manual. These orders are identical to those used in other battlescape wargames so Turcan addicts will feel at home. They can be as simple as "Longstreet move to the HQ" or as complex as "Longstreet order 2 infantry divisions to attack the enemy 1 mile easy of the peach orchard." Getting used to this method takes time but it's well worth the effort.

Special 3D plains represent the gradients of the landscape, with houses and troop camps shown as tiny square blocks. Using the commands LOOK NORTH, EAST, SOUTH or WEST you can study the map from any direction. As the course of the battle changes the map is carefully re-drawn. (This takes several seconds but the time lost isn't a nuisance.) Sound effects have undergone some big improvements: in the first Turcan game there was no sound whatsoever but later games in the series began to incorporate limited sound effects. Gettysburg certainly isn't going to introduce you to the cacophany of war but sound effects for cannon and musket fire lend much to the atmosphere.

Gettysburg is the fourth of the Turcan wargames and there are many improvements over the first, the biggest being the ability to load new scenarios. Gettysburg comes with a scenario loader, enabling Atari to release a set of scenario disks for Gettsburg which can change the objective and beef up the action.

Other additional features include:

It seems years since we last saw a Turcan wargame and this one is certainly desperately needed. If you've played other wargames in the series you won't need any persuading to buy this one, but if you're new to the Turcan wargame concept it can seem frightening to get to grips with: the playing environment looks completely different from anything else you've seen, and passing orders can be a nightmare until you've worked out what each command can do.

Persevere, though, and you find the game remarkably rewarding. It puts you in the seat of the Commander-in-Chief and you begin to feel like you're really a part of the battle.