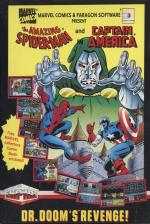 Comic licences have been popular for a long time, spawning hits such as Batman, Garfield, Snoopy, Asterix and even Tintin. But it's the Superheroes who have always come top of the list. Captain America and Spiderman may not have Batman's mega-game but they do still have the Marvel magic. Paragon Software, new to ST programming, were given the job of translating that magic into gameplay.

There's a vague plot to Doom's Revenge that suggests you use Spiderman and Captain America to find a way into the mysterious fortress of the evil Dr. Doom. This is merely an excuse for stringing together a series of action levels in which you pit your joystick skills against an enemy.

You're launched into the game as Captain America and must quickly acquaint yourself with an illogical set of joystick moves to defeat a robot who wheels into the room and proceeds to punch you. This is the Superhero equivalent of a street-fighting game, with the added bonus that you have Cap's sheild to strike out at the robot.

There's an energy scale for each character at the base of the screen indicating who's doing best in the fight. When you've hit the robot enough to take his energy to zero, he dies and you move onto the next level.

Level two is horizontally scrolling and the aim is to dodge fireballs by either leaping over them or rolling along the floor. Unfortunately, the screen scrolls so slowly that it's laughably easy.

You then adopt Spiderman's persona, leaping onto walls and ceilings and whipping out a web for dealing with the bad guys. Sadly, Spidey's hopeless at hand-to-hand combat. Your first problem is to overcome Cap's robot again but in different surroundings. When he's dead, another creature appears and the surroundings change, but the fight is still the same.

The scenario continues like this with each Superhero performing heroics in two scenes. An energy level is assigned to Spidey and Cap which plummets during a fight. If either character's energy hits zero, the game is over.

For all its problems in the playability department, Doom does have some auspicious still graphics. They're not as polished as they could be, but they certainly capture the Marvel spirit. Unfortunately, the animation is jerky and hopelessly amateurish.

Although most of the game is played against a still backdrop, it's obvious the programmers came up against the infamous ST horizontal-scrolling problems and came up with their own original solution; forget scrolling and go for good old-fashioned jerks.

If you're looking for digitised sound, or even a half-decent spot effect, you won't find it here. Sit back and listen to a ridiculous beep bop bap computer tune and laugh yourself silly as your mind floats back to the days of the diminutive 8-bit micro.

The Marvel licences make a great base for computer games and with two characters in the action Doom should lend itself to more good ideas than usual. But the programmers, who quite obviously didn't have a clue about the possibilities for ST games, have turned out nothing more than third-rate mediocrity. Doom is boring, dated and deadeningly dull.

Another frustrating aspect is the loading times. The initial loading wait is long enough, but this is followed by coffee break "time-out" between every scene.

Apparently the 8-bit versions are supposed to be playable - so if you really insist on buying Doom, you'd better start dusting down your old micro.

This is boring, dated and deadeningly dull. Apparently the 8-bit versions are much more playable - so if you insist on buying this, get one of those instead and dust down your old micro.