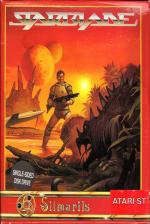 After the intense strategies of Imperium, relax with Starblade and take a 3D trip around an alien-infected universe. This is the latest in a long line of space-trading games, but this time the emphasis is on manic joystick skills rather than long-term planning.

The scenario is the usual dramatic nonsense: the human race has been decimated by an evil hag called Genolyn. She is about to spawn a legion of super-warriors and you need to track her down by finding a series of disks which reveal her location and kill her before she breeds.

You explore the universe in your trusty space carrier, go into hyperspace mode, and land on other planets. This feat is complicated by aliens who attack you unless you come equipped with the necessary weapons.

Before you explore other planets you need to test the atmosphere and decide whether a space suit is necessary. The suit is required when a planet doesn't have an oxygen atmosphere. The suit only contains a limited supply of oxygen, so it's best not to wear it unless you need to.

The suit and other goodies, including a laser gun and replacement circuit boards, are found in compartments located around the ship. Unfortunately, because the cruiser is rotating, just moving around can be a major headache. Although this might sound intriguing, in practice it's maddeningly frustrating.

Starblade is played in a resplendent 3D environment. Your character moves in a realistic fashion and each time his foot hits the floor you're treated to a crisp heel-click, similar to the hero of Impossible Mission.

The game is played on static screens, but the backdrops are varied and extremely well-detailed. As you explore your space cruiser and collect weapons or don your space suit, a different graphic appears, giving the game an absorbing atmosphere.

Drop Starblade into your disk drive, switch on your ST and wham! - the first thing to hit you is the size and life of the visuals. The backgrounds are detailed and your hero moves so smoothly that it's easy to fall into the trap of thinking this is a great game. Unfortunately, once you've played it for a while you discover that the action is extremely limited.

When you get as far as finding and landing on planets, you realise that there is very little to do, particularly if you make the trip without all the necessary weaponry. Starblade takes that all too-common route of trying to hide poor playability behind expert visuals.

Looks good, but the action is extremely limited. Starblade takes that all too-common route of trying to hide poor playability behind expert visuals.