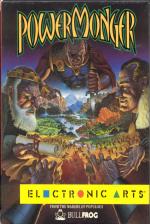 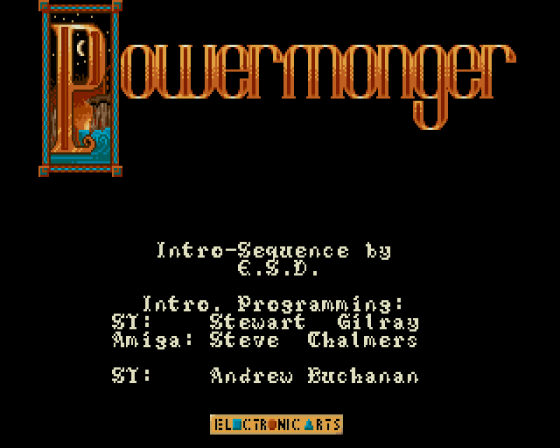 If you're the sort who longs for a starring role in the Gulf War, or have a ghoulish fascination with dead bodies, or you're just plain power hungry, then your needs are about to be satisfied, sicko. Forget all the rumours and play PowerMonger for yourself - finally. Mark Higham discovers how to subjugate villages and bring a nation under your command...

God games like Supremacy, Millennium 2.2, UMS 2, Populous and Sim City are hypnotically compulsive. None of them, though, had as much to live up to as PowerMonger. It's the latest game from the Bullfrogs, the programmes who created Populous, which was deservedly one of the biggest-selling ST games of all time. But although this is a God game played on an isometric 3D landscape, that's where any similarity to Populous reaches an abrupt end.

Your ambition in PowerMonger is to conquer a staggering 195 territories - but you handle each of them individually, so in any single game the objective is to win just one territory. You can then save your position to disk with the save-game option, coming back later to tackle more. 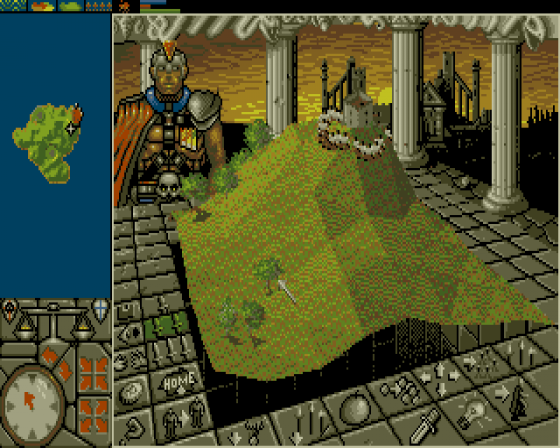 An overview map in the top left of the screen shows the entire territory you're playing on, while a detailed close-up map reveals a small section of it in impressive 3D. You can use this to zoom in on individual characters, settlements and battles. By clicking on four icons at the top of the screen you can spotlight settlements, people, roads and contours on the overview map to help plan where to direct your campaign.

To initiate a move, you first select a Captain from your ranks and then send him off with his men to subjugate a village, trade or form an alliance. At the start of a game you have only one Captain but you can accumulate more as you press forward.

In the first territory all you have to do to win is race round the island and attack every settlement you can lay your sword to before your obedient serfs starve to death. To attack, you select the Attack icon and then highlight the settlement you want to target. Your men race off to it and begin to attack. If it's equipped with superior weapons you're likely to fail - and in this case small angels rise from the battlefield as your men are sliced to death. If you succeed in defeating the village, your men gather in a cricle around your Captain until you decide what audacious move to make next.

Usually you wouldn't charge short-sightedly into battle. Instead, you first check how far the village tribe have advanced and how many people live in the village. You may need to send a spy out to gather this information; in which case, you have to wait for him to reach the destination before you can respond.

If the people are intelligent they may have developed pikes, bows or even cannons. Each weapon, naturally enough, has different abilities - a bow or cannon can fire on you from a great distance and pikes can easily kill two people with one blow.

Instead of attacking a village armed with this kind of technology, it's in your interests to form an alliance instead. By joining forces with another Captain you increase your attacking ability and proceed twice as quickly around the map. You can leave one Captain and his men to develop weapons and another to attack or recruit other villages. 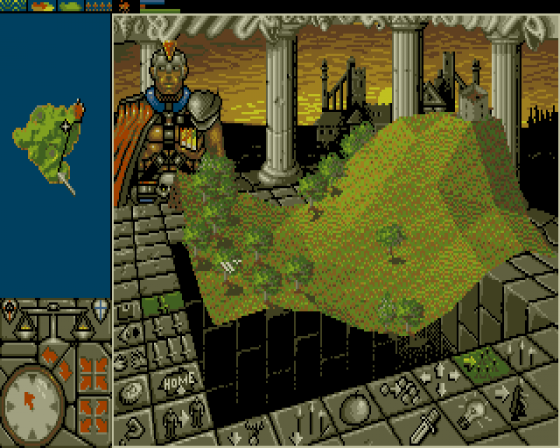 It's wise to spend time inventing your own weapons. The more time you give villages to develop a weapon, the better the object they come up with. But you have to remember that all the time weapons are being developed in your villages, they're being invented in the villages belonging to your enemy as well.

A pair of scales at the bottom left of the screen indicate your progress. When the scales have tipped in your favour you can retire from the fight. You're then informed that you've won the island and you're returned to the main map where you can select the next adjacent territory to attack.

In the more advanced games you can have as many as four computer opponents all competing for prime slots on the territory. They often develop weapons judiciously and then attack with prime accuracy. You don't win the game by being nasty but by caring for your people's needs. You must keep them supplied with food and be sure to attempt alliances and trade, not just whip out your sword and go on a bloodthirsty search for flesh. 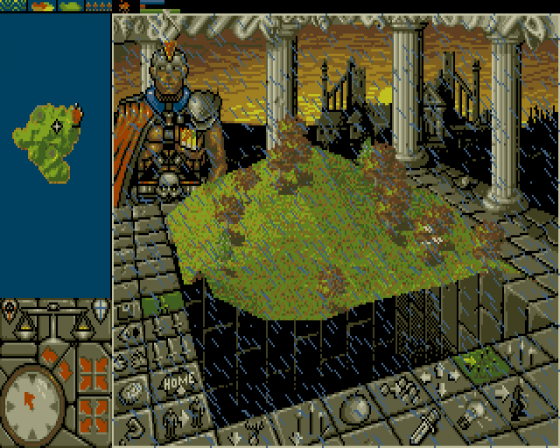 This is no simple re-hash of Populous. Although the isometric 3D playing area looks similar, the landscape has so much extra detail that it's radically different. Villages comprise taverns, workshops and barns, with some effectively pouring out of the occasional chimney. Every character in the game is represented by a small graphic and even has its own name. Using a Query icon you can click on each character and display his name and profession. There are even sheep roaming the fields and birds flying through the trees.

Complicating your viewpoint and affecting your villages' ability to product food are regular falls of rain and snow. When the snow falls on the landscape, everywhere pales gradually into white.

Sound effects are equally comprehensive, and for once they arent' limited to a handful of spot indeterminable grunts. Instead, you're treated to the sampled sounds of sheep baaing, birds singing and men going to work in villages. This adds a whole dimension to the gameplay: if you merely overhear the men in enemy villages working you may want to go there and put a stop to their ambitious designs.

Each year there are a tiny handful of games which look like something really special - the ultimate game? Although PowerMonger is a technically better game than Populous, however, it doesn't have the same immediate appeal, and this is going to prove off-putting, particularly to people who've just bought the thing and are new to strategy-war games.

Sadly, what lets PowerMonger down most is its 44-page manual. Whilst it adequately explains how each icon can be used and how to utilise the different options to your own advantage, unlike comparable manuals such as Supremacy's, it lacks a walk-through of the first few minutes of play. Instead, you're tossed into the action and left recklessly to your own devices to work out by trial and error the best way to win a campaign. Thus, the first time you pick up PowerMonger you're not sure whether you should concentrate on inventing new weapons or just stick to your sword and dart round the island using it on every poor little homestead you can reach.

Nevertheless, once you've finally worked out how to proceed, this is one of the most absorbing games around, in the same league as Supremacy and Millennium 2.2. With astonishing attention to detail and an engrossing range of options at your fingertips, you just can't stop conquering villages.

Note: Why is it, we wonder, that some magazines reviewed PowerMonger three, and even four, months ago when this is the first finished copy?

One of the most absorbing games around, once you've finally worked out how to proceed, 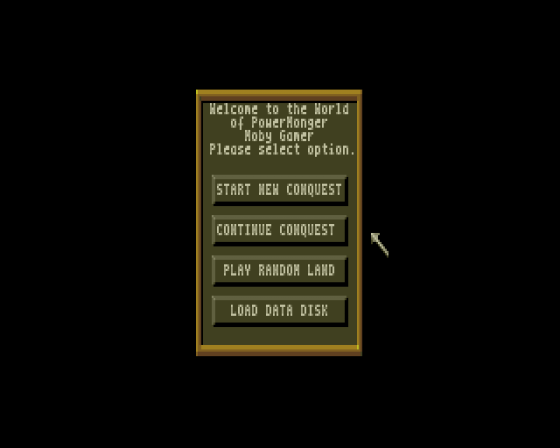 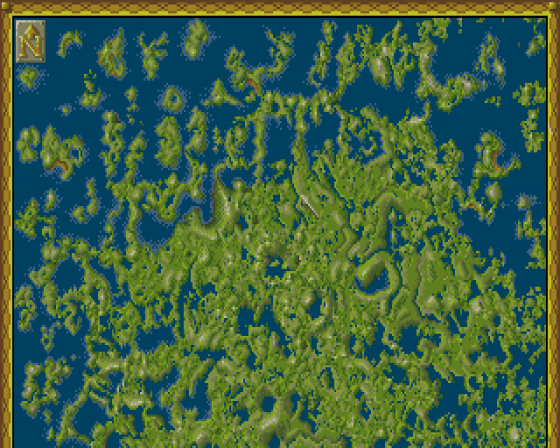 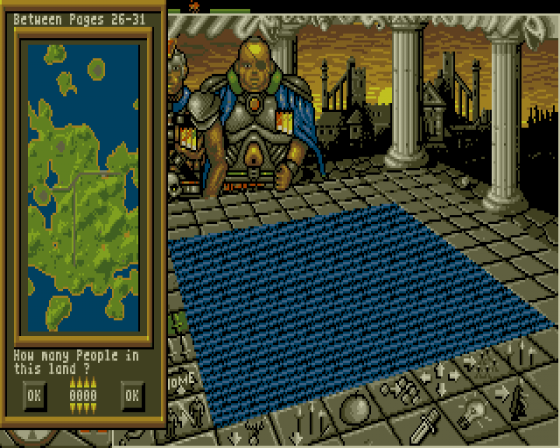 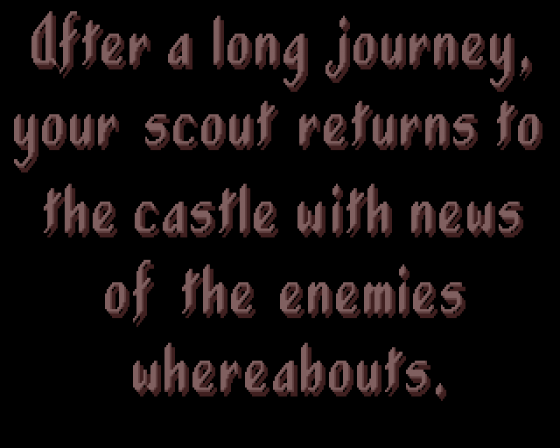 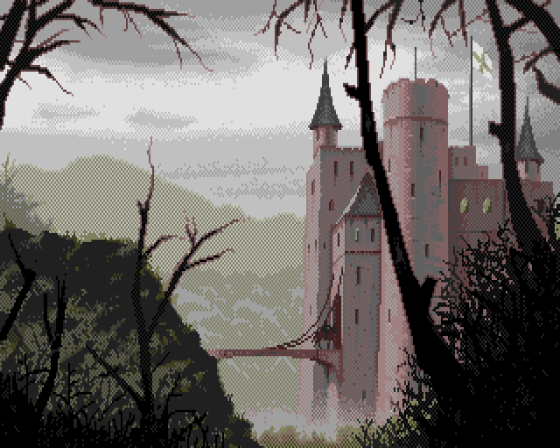