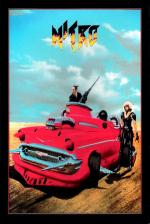 Racing is supposed to be a sport so be a good sport and go kill yourself on a racing track. That, at least, seems to be the message with Nitro, a three-player simultaneous racing game.

Unlike most racing games we've seen recently, the action isn't viewed through the windscreen of your vehicle. Instead, you get an overhead shot of the track with all four competing cars represented by simple sprites. The objective is simple (and predictable): race up the scrolling screen to the finish line before your opponents. There are special pick-ups you need to collect en route such as nitro boosters, headlamps and cash, to buy goodies from the shop at the end of each race.

After just watching Mad Max 2, you could charge along the track and enjoy splattering every pedestrian in sight. This, however, tends to slow you down and rob you of points, so if you're looking to progress it isn't an advisable way to play.

There are 32 tracks in all, played out over four different types of terrain in both day and night-time situations. With night-time tracks you need to have collected light bulbs which give you headlamp power. You can then see a short area of road in front of your car. Without knowing the direction of the track you must follow the computer-controlled car and then sprint to the finish post.

The game is disappointing because it doesn't have a 16-bit feel to it. Overhead views of the race track have long since been abandoned in favour of presenting a more realistic front-on view. As you can see from the screenshots, small sprites and ineffective collision graphics are the final nail in Nitro's coffin.

Complementing the visuals are some simple ST sound chip tunes which send you mental if you're dumb enough not to turn the volume down. Spot effects are few and far between, thankfully!

The visuals make you laugh; the sound effects make you want to chuck, but there's nothing about Nitro which you could say is truly awful. It's simply an old 8-bit concept with no original or exciting 16-bit elements. If you were a fan of Major Motion and you're looking for the chance to compete in a three-player simultaneous race then Nitro satisfies - just. If you want something that exploits the full potential of your ST, however, then this sadly just doesn't deliver.

This is an old 8-bit concept with no original or exciting 16-bit elements. It's simple, and if you want something that exploits the full potential of your ST, however, then this sadly just doesn't deliver.