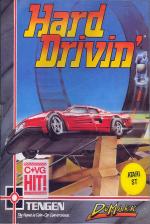 Far and away one of the most sophisticated coin-ops ever was Hard Drivin'. Its 3D routines made it more of a strategy game that a slam-your-foot-down and sprint round the track. Everyone said it would be impossible to convert, but Domark have taken up the challenge.

Hard Drivin' has two tracks - the speed course and the stunt course. The first few times you play, you'll go for the second because it's more attractive, but later the speed course is more of a challenge.

The stunt track has lots of hills, a half-opened bridge, a daunting loop-the-loop and a section of angled track. To succeed at these events you must be moving at the right speed, suggested by a roadside sprite before the obstacle. If you move too slowly or too fast then you will fail.

With lots of other cars straying around the track at the same time, it's easy to bump into someone else tackling the same obstacle or coming at you in the opposite direction. This can transform an easy stunt into a complex timing of movements.

The speed track is more about getting a good lap time. This is important because if you complete enough challenges you take on the super-racer, the Phantom Photon. He races against you on the speed track and, if you beat him, you win his hero's crown and your lap progress is saved onto disk. Your decisions can be used in future races. As a result, you can compete against your own last lap time or you could even give the disk of your progress to a friend so they can race against you.

It takes a long time to get this good and you'll become far more experienced at crashing than anything else. There are two crash situations apart from collisions: if you stray off the road for too long or if you drive too far from the track, then you die. Irrespective of how you meet your end, an action replay of your mistake is offered.

The game can be played using the joystick or keyboard but the mouse is the recommended way. In this event, the left button accelerates while the right brakes. Movements left or right indicate your direction.

You can play the game using an automatic or manual clutch system. By selecting manual you can plug in a joystick and treat it like a conventional joystick.

It's the 3D routines which are Hard Drivin's strong point. They add a sophisticated feel which makes the hills, bridge and loop exciting to tackle. With fast sprites, obstacles are a big problem on the stunt track. There are occasional glitches in graphics, such as dodgy sprites appearing, but nothing likely to upset your gameplay. There are three sound effects - engine noise, the skid screech and a warning sound when you stray from the track. They all use the sound ship so don't win any prizes for quality.

Hard Drivin's main claim to fame is its 3D routines. Similar effects were achieved with MicroProse's hit game Stunt Car Racer, but without the same sleek feel. When you learn the programmer has a mathematics background you realise why the movement is so fast and smooth.

Largely because Hard Drivin' is mouse-controlled it feels similar to EA's Powerdrome, but not nearly as difficult. Sideways movements must still be made carefully though - push over too far and your car will skid. Speed is usually the factor deciding whether you survive a stunt or not.

The long-term interest value of the game is suspect. Two playing tracks are a lot of fun but they become tedious and less challenging in time. This is more noticeable than in the arcades, because without the steering wheel and stick of the arcades much of the tension has been lost.

Domark have anticipated these problems and plan two releases for 1990. In Spring they hope to release a disk of extra courses, while a course designer is planned for the end of the year. It looks as though we shall be enjoying the 3D environment of Hard Drivin' for some time to come.