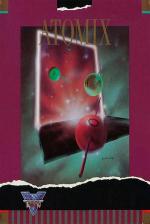 The last game using molecular structure as the basis of its gameplay was US Gold's E-Motion. Atomix treads much the same ground, but lacks E-Motion's hypnotic visuals and creative sound.

In the left-hand bottom corner of each level, you're presented with an atomic structure. Your job is to pick up atoms, move them around a series of walls, and assemble the required structure. Sounds simple? Wait until you start playing.

Use the joystick to select the atom you want to move. Unfortunately, you can't just pick it up and position it anywhere you like. Once you move the atom, it only comes to rest when it bumps into a wall or another atom. The trick is to arrange atoms so they come to rest in the right position. If you build it in the correct spot, the nearby walls act as a barrier so that atoms stop close to the desired location.

In the first level you construct a water particle by linking two atoms of hydrogen to one of oxygen. This is remarkably simple, but by the time you reach level two you're building ether molecules (C2H5OCsH5) where your brain power is really put to the test.

Each time you complete five levels there's a bonus puzzle for you to solve. The first of these features glass containers filled with different volumes of liquid. You have to arrange them in increasing order using the same sliding technique employed in the main part of the game.

All the levels have a time limit ranging from two minutes for easy levels up to four minutes for the near-impossible ones. Each time you reach a new level you spend much of the time working out the best place to build your molecule. This often means suffering defeat the first time you tackle it, but at least you're prepared the next time the challenge arises.

Played with a handful of colourful atoms over the top of a grey background and grey walls, this is one of the most visually uninspiring games ever. The only redeeming point is the nifty intro sequence and some clever sound effects when you make a move. Bonus screens are presented every fifth level and offer a reprieve from the overall drabness.

This is a wonderfully addictive challenge which, apart from the dull visuals, is actually more appealing than E-Motion. The puzzle element is more thought-provoking, the skill required to complete many of the later levels is exhausting, and you don't need to be a master of the joystick.

The only real criticism is that if you lose a level, the game comes to an end. With every fifth level you complete you're given one extra credit, but this isn't nearly enough. The game would have been much more appealing if your position could have been saved to disk or if passwords could have been used to take you back to the last level.

If you're the kind of games purist who wants absorbing gameplay rather than flashy graphics, then Atomix is going to keep you perched on the edge of your seat for hours. Extra touches in the effects department would improve the game enormously, but it wouldn't enhance the gameplay. Atomix is undoubtedly one of the most engrossing puzzle games to ever hit the ST!

Undoubtedly one of the most engrossing puzzle games to ever hit the ST!