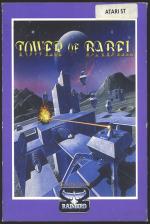 Who said the Old Testament was gospel? Microprose are trying to prove that it was all a load of hogwash with this major strategy game. According to them, the towr of Babel wasn't built for God, but for a bunch of mechanical aliens from the planet Zantor who took control of its construction.

The Shinarians were an Earth tribe wanting to contact God. And since the telephone hadn't been invented, the twoer was the next best thing. When the Zantorians came along and saw the tower they tried to assist in the building so they could climb to the top and use their own telecommunications system to phone home.

The Shinarians were upset at having their tower invaded and built Zantorian-like robots who opposed the tower's construction. They made life hell for everyone.

Your role is to control three of the Zantorian robots, collect building blocks (Klondikes) and avoid the enemy. If the plot sounds convoluted - that's because it is. But in a strategy game complexity is to be expected.

The towers are solved by collecting all the Klondikes. Each tower is arranged as a set of coloured panels, sometimes on two levels. You have three spiders under your control to help you collect the Klondikes - a Zapper, a Pusher and a Grabber. They're called spiders because they're four-legged, crawling robots.

The Zapper zaps certain objects out of the way. His main role is to rid the tower of enemy robots - but be careful, he can blast your own spiders as well!

The Pusher shoves things out of the way. He removes blocks and other objects littering the tower.

The Grabber picks up Klondikes. He also links to objects in some towers that enable him to carry out special tasks such as freezing enemy robots or swapping positions with them.

You use a set of directional arrows at the bottom of the screen to move the spiders around the platform. Select the spider you want to move and click on the directional arrow to move him forward one coloured panel. The spider moves slowly - but you can set other spiders in motion at the same time. An option to program the spiders lets you enter a series of directions which are executed in turn, sending spiders all over the place.

Once you learn to control the spiders (the easy bit), the next step is to confront the problem of collecting Klondikes. The idea is to use the Grabber to pick them up - but watch out for enemy Zappers installed around the tower, or your spider will be zapped to death!

Opposing Pushers are scattered round the towers ready to frustrate you by pushing blocks into your path. In level one there are three Klondikes in a row, but by destroying the first one you open up a square that a Pusher blocks. With the obstacle in front of the other Klondikes it's impossible to solve the tower because all the Klondikes must be collected before the tower is complete.

There's a set of towers in each group. Completing one tower presents two linking towers to be completed. A group isn't complete unitl all the towers have been solved. Your score depends on the number of Klondikes you manage to collect.

One problem with the game is that you can't tell if a tower is solvable. It's possible to move things around so you can't complete a tower, but you're only told it can't be done when all your spiders are zapped.

At any time in the game you can switch from playing through the eyes of a spider to viewing the scene from the cameras. These are located North, South, East and West and face toward the tower. You can move up and down to gain a different perspective and zoom in and out. This allows you to spot the locations of enemy Pushers or Zappers and plan your strategy.

The game is totally logic controlled. There's no luck involved at all, so you're pitting your skills against the designer yourself, because there's a level designer which lets you create a group of towers as complex or as easy as you wish.

The 3D routines are brilliant. You're playing through a large window, but the action still moves quickly.

The Spiders chug along slowly - which can be annoying - until you gain the confidence to move around more than one at a time. The ability to move several spiders and still zoom in and out on the levels without losing speed makes it very playable.

Sound is limited to firing noises and spot effects accompanying the movement of spiders.

Good strategy games are notorious for being insanely difficult to get to grips with - and this is certainly not one of those games that can be picked up and played within five minutes of tearing off the shrinkwrap. Even when you understand the principles, there are so many problems specific to each tower that it never becomes easy.

If any criticism is levelled then it has to be that there's a lot to understand before you can play. The manual boasts a step-by-step guide so initiation is made as painless as possible.

It's the mixture of excellent graphics and strategy which makes Tower Of Babel a success, and if you combine this with no luck-factor involved, only sheer determined logic, then you have yourself a challenging and addictive game.

It's the mixture of excellent graphics and strategy which makes Tower Of Babel a success, and if you combine this with no luck-factor involved, only sheer determined logic, then you have yourself a challenging and addictive game.