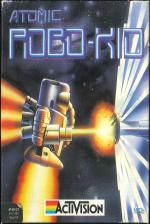 Let's face it, the common or garden shoot-'em-up has had its day. We've seen some stunning visuals, been dazzled by great attention to detail and even grooved to some funky soundtracks, but the formula is still the same. Atomic Robokid doesn't claim to offer any radical new deviations, but with a host of collectables and a new collision routine it has all the signs of an absorbing game. The only problem is, are you up to yet another new shoot-'em-up?

Robokid certainly loses out in the glamour stakes. Instead of commanding some kind of inhuman superhero, your character in the game is a souped-up dustbin and at the start of a game you have no special abilities. Robokid can't fly and he has only a standard blaster, but a flying pod is just over your head and bonus pods for extra weapons are waiting in front of you. Pick up the flying pod and you're on your way.

Your objective is to plough through up to 28 levels. (Some have multiple exits so you could complete the game by exploring as few as 24.) These are arranged as a maze of corridors, often with enemy installations set in the roof, firing at you as you fly past. Besides these, there's a vast array of different enemies flying round the levels shooting at you. Only their firepower can kill you: unlike in other games, making contact with enemies just slows you down.

Along the way you also encounter oppressive end-of-level guardians. In level one, for example, you face the end of a road sweeper's brush spinning wildly towards you, and you can't pass until you've blasted it over and over again.

A square block at the end of each level gives you access to the next. In some cases there are two such exits, leading to two different levels. After every third level completed you're trapped in a room with a large monster and cannot progress until you defeat it.

Hosts of extra weaponry pods enable you to equip Robokid with an improved arsenal. Some of the better weapons available include a three-directional laser beam, a speed-up pod and missiles capable of destroying bullets as well as enemies. Since it's only bullets which kill you, these missiles can be very useful to get hold of.

Sprites aren't especially large and few are animated, but each level has some kaleidoscopic backdrops appropriate to its own theme. Without the speed-up pod, the action moves fairly smoothly and the scrolling responds to your movements, enabling you to go back through a level and explore it at will. The scrolling slows down enormously when the screen is pulsating with enemies.

Unlike Dragon Breed's, these visuals aren't going to knock you backwards - but what Robokid loses in graphics, it more than makes up for in playability, and that's what shoot-'em-ups ought to be all about. Robokid is addictive, enormously entertaining and has enough levels to keep you coming back over and over again. The scrolling and graphics mightn't excite as much as other games in the genre, but it's the gameplay that matters most. Watch someone else playing Robokid and you're unlikely to appreciate how much fun it can be, but start toying with the joystick yourself for a moment and you won't be able to rip yourself away.

Watch someone else playing Robokid and you're unlikely to appreciate how much fun it can be, but start toying with the joystick yourself for a moment and you won't be able to rip yourself away.