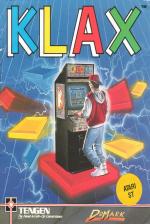 Mirrorsoft came up with a winning formula when they released Tetris several years ago. The aim of the game was simply to line up different-shaped blocks. Graphics were primitive and sound was paltry, but the simplicity of the game and the ease with which early levels could be mastered, introduced droves of new people to computer games.

Klax has made some gargantuan leaps forward in the graphics department, sound has been enhanced, and though the game style has undergone radical alteration, the theory is still the same. The objective is to catch tiles and arrange them in a certain way to advance to the next level. Tiles roll rowards you down a coloured track and you move a baton left and right to catch them. There are five different bins and by hitting the spacebar you can throw the top tile into the bin underneath the baton. A maximum of five tiles can be held on the baton at once and then dropped into the bins at will.

The purpose of collecting the coloured tiles is to build up a Klax. This is defined as a set of three identically-coloured tiles laid vertically, horizontally or diagonally. As you toss the tiles into the bins they form coloured rectangles, laid top to bottom. When you've laid three of the same coloured tiles and formed a Klax, all three are removed. Any tiles which lay on top of these drop down to fill in the gaps.

At the start of a level you're presented with a title screen which informs you of the objective for that level. In the beginning the objective is just to build up three Klaxes, but later on you must build diagonal Klaxes or amass a specified number of points. Diagonal Klaxes are worth the most points, but they are also the hardest to create. Fulfilling the objective of creating thirteen Klaxes in the level printed alongside can be almost impossible - at least until you learn to think fast enough to keep pace with the game.

It's the special effects which make Klax so much fun to play. There are three levels of action which become increasingly more difficult. As you advance through these levels, you're treated to three different backdrops, each illustrated on this page. The movement of the tiles down the coloured track is the same in each level with an increased range of colours for the harder levels. The movement isn't particularly realistic, but it's convincing enough to keep you returning for more. Sound effects are limited to lively tunes and the noise of rolling tiles - all achieved with the ST's sound chip.

Drop Klax into your disk drive, switch on your ST and launch yourself into one of the most challenging and addictive games released this year. The different objectives for each level constantly keep you on your toes. Some are easy, others insanely difficult, but there's always the feeling that if you're a little faster or a little more perceptive, you could complete the level. It's that kind of feeling which has you returning to the game over and over again.

Klax doesn't have enough variation to rival Tetris and there's just too little depth to make it a long-term classic, but that's going to make no difference to the immediate appeal of the game. Klax is fiendishly addictive and you won't be putting it down in a hurry.

Drop Klax into your disk drive, switch on your ST and launch yourself into one of the most challenging and addictive games released this year.