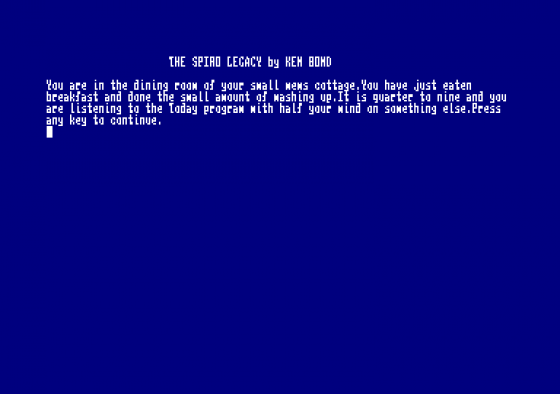 The start of The Spiro Legacy starts innocently enough. You are sitting in the dining room of your small mews cottage listening to the Today program on the radio when a large package arrives in the post. Inside the package is an old fashioned door key, and two letters, one from some solicitors in London and the other from your deceased Uncle Spiro. Now things start getting interesting... The letter from the solicitor informs you of the reading of the will - it seems your Uncle died in mysterious circumstances but he left almost all his estate to you. This sounds great until you read your Uncle's letter...

You see Uncle Spiro was a famous magician, who had appeared on TV and done many stage shows, but Spiro's letter reveals his secret - his tricks were so fantastic and inexplicable because he used *real* magic. Spiro's greatest friend was Sir Richard Maltravers whose castle adjoins your Uncle's to the north. 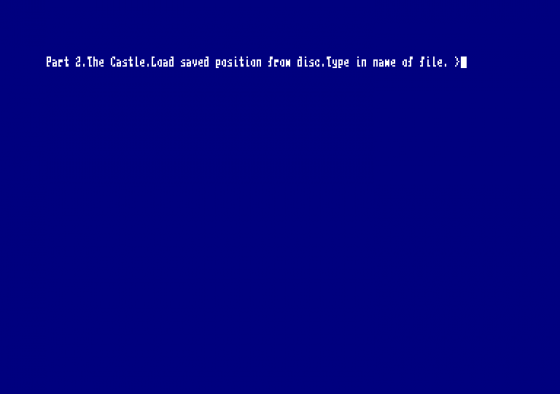 The letter explains how Sir Richard shared Spiro's passion for magic but succumbed to the dark, evil side. Your Uncle expresses a fear of Sir Richard and asks for you to enter Maltravers castle and exorcise him. He warns you that this will not be easy - Richard will have set many magic traps but your Uncle writes that he has hidden spells (Hidden so that Maltravers cannot discover them!) which you can use on his own estate. This is your Uncle Spiro's Legacy.

The game comes in two parts - the first being set in your house and Abbeyville (your Uncle's estate) whilst the second is set in the grounds and interior of Sir Richard's castle. Your Uncle certainly was rich - his house is a real mansion with servants' quarters, ballroom, library and music room - quite different to your small cottage! He even had his own 6128 and printer (obviously he had taste!)

The game is a sort of mixture of other games' plotlines - you've got the magic system from the Infocom Enchanter series and the horror from Price Of Magic. In fact a lot of comparisons could be made with these games - both have a magic system and involve a rogue magician. However, it would be unfair to make direct comparisons - PAW is not really up to the standard of Level 9's or Infocom's in-house system (Although I still believe it is the best commercially available on the CPC).

As mentioned in your Uncle's letter, Spiro has hidden various (useful) spoils around his house. These spells are very well hidden - on computer disk, encased in honey and elsewhere - the spells have some strange names as well. All of them, for some reason, end in the letter O! Hence, you have VIMTO. BISTO and FLYMO amongst others! To use a spell you must 'CAST FLYMO SPELL ON ME' - I initially had trouble with this as I forgot to include the word SPELL but once this was overcome everything went well.

Part two has you wandering around Sir Richard's castle, avoiding the various traps he has set to catch you whilst you are trying to find and exorcise him. There are two mazes to solve and various other magical and non-magical puzzles to heed or halt you.

Ken has increased the level of interaction and made it even better than before - not only can you examine, look in, look under and look behind, you can now feel in spaces that are dark. So, you could feel up the inside of a chimney or feel behind a seat. As with most PAW games, you can also ramsave and ramload and it will understand sentences like: 'fill the bucket with water then place it on the platform' or 'drop everything except the copy of Amstrad Action'. However I did find a couple of problems with the parser especially with regard to character interaction - in part two you have to talk to an old crone and ask her questions... The program is choosy about the inputs it accepts.

Once again, Ken has written another brilliant adventure - great puzzles, good parser and verbose descriptions - another worthy addition to any adventurer's collection.

Another brilliant adventure from Ken Bond - great puzzles, good parser and verbose descriptions... Another worthy addition to any adventurer's collection. 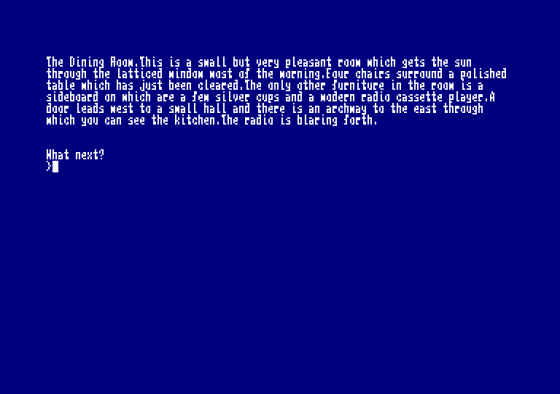