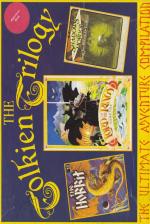 Adventure compilations are rare things - especially good ones - so it is good to see that Beau Jolly is re-releasing The Hobbit, Lord Of The Rings and Shadows Of Mordor in one pack.

Many adventures have a Tolkienesque flavour, so it was inevitable that the most famous fantasy novel of all would turn up on computer. For those of you who have never heard of these games (where have you been all this time?), they take place in the world of Middle Earth, immortalised by JRR Tolkien in his various books. Each of the games is a 'classic' in computer gaming; The Hobbit as it was one of the first with graphics and interactive characters who acted intelligently (most of the time); Lord Of The Rings for the sheer size and complexity attempted for a tape-based game (and of course for its bugs) and Shadows Of Mordor because, again, of its size and complexity (and fewer bugs!)

All the games are now quite old (over two years) but the magic is still there, especially for readers of Tolkien. (If you haven't escaped from the Goblin's dungeon, you haven't lived!) The Hobbit is limited by today's standards but The Lord Of The Rings and Shadows Of Mordor have some impressive features even now, such as complex character interaction, large vocabulary, independent characters, and complex parsing together with over 200 locations in each. They also feature the ability to 'become' different characters (such as Frodo and Sam) to complete the game.

Because of these advanced features, Lord Of The Rings especially is very slow... Picking up an object can take ten seconds and moving locations twenty! Thus great patience is needed to complete the game. Another feature of LOTR (and also The Hobbit and Shadows Of Mordor to a lesser extent) is the bugs in the games. In fact bug-hunting in LOTR became for some, a hobby - the game has so many!

In conclusion, there's no doubt that LOTR is seriously bugged in places, but all three games are challenging and I enjoyed them very much (especially because I make a star appearance in the Lord Of The Rings).

If you haven't got them, and Scapeghost doesn't appeal to you, don't think twice - buy 'em!

If you haven't got these adventures, don't think twice - buy 'em!
Logout