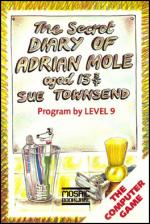 The Secret Diary Of Adrian Mole

Finally, here's another excellently designed game that I consider to be extremely significant.

Level 9 have teamed up once again with Mosaic to bring you the now not-very-secret adventures of young Mole, a spotty teenager with a crush on a girl called Pandora and a lot of very personal problems, most of which can be seen on his chin.

The idea of having a program that really just tells a story by scrolling text up the screen and occasionally asking the player to choose a course of action that may alter the plot is not new. It all started with the "Fighting Fantasy" books and was programmed on the Spectrum by Five Ways Software a year or so ago. However, it has never really caught on because of the problems of fitting enough text into a cassette-based system to make the whole exercise worthwhile.

Level 9, however, have achieved the notable feat of cramming no less than 200K of text into four separate data blocks, which altogether adds up to around 35,000 words if my Wordstar files are anything to go by. Each block comprises further extracts from the diary of Mole, and you can't move on to the next episode until you've finished the earlier phases.

As you play, pretty graphics appear at the top of the screen, and what seems like endless text scrolls up the screen below. Occasionally (and more frequently as the game progresses) it halts and asks you to choose between one of three alternatives. These are usually along the lines of "What shall I do: (1) Go to the party (2) Stay at home (3) Invite Pandora to the party" and the plot then unfolds, according to which selection you made.

There are two obvious questions here. First, does the plot really change all that much, and second, if you've already read all the Mole books (millions have!), is there going to be anything here to hold your interest that you don't know already?

Well, there's no doubt that the plot does change quite a bit as you proceed to make your various choices, but perhaps not quite as much as one would like. I suppose that this is because some things are really fundamental to the plot - like meeting Ben Baxter, the OAP - and if you were to miss these out altogether then real problems might arise with the script.

As it is, if you decide (as I did) not to visit Bert Baxter, the program cleverly goes along with you for a while until it finds an excuse to get you round to his house. It's done very well, but it does have the effect of repeatedly introducing certain events each time you play the game - but then that happens with all adventures, so one can hardly complain.

What's really remarkable about this program though, is that 50% of the material is completely original and different from the existing Mole stories. I had simply assumed that Mosaic had drafted in authoress Sue Townsend to dream up some more dilemmas for her young hero, but no! All the additions were actually made by Pete Austin of Level 9.

Ye gods, the man's a genius! He's more like Sue Townsend than Sue Townsend herself - at least as far as the script's concerned. With only one or two minor exceptions, there wasn't a paragraph that couldn't have come from the pen of Ms. Townsend - the text is hilarious, witty, and beautifully written, and most important of all - it's full of surprises, even if you know the books backwards.

As I've already said, I reckon this is an important program. Now we've seen one series of books successfully implemented on a micro using this technique, it's my firm expectation that there will be more to follow. Stand by for "Live And Let Die" - and in the meantime, get a copy of The Secret Of Adrian Mole!

The Secret Diary Of Adrian Mole

Hilarious, witty, and beautifully written, and most important of all - it's full of surprises, even if you know the books backwards.