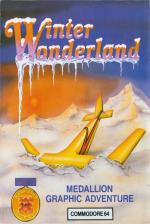 These two games were written using the Graphic Adventure Creator and form part of the Medallion adventure range from Incentive - a new collection of games that offers, so Incentive think, the "best of GAC".

I have only seen these games on another format, so I don't want to give them a full review at this stage. However, both releases have good graphics, reasonable puzzles and original plots.

Apache Gold, as its name suggests, puts you down in a wagon in the Wild West and has you parleying with Old Timers and Injuns in an attempt to locate a bit of the old precious metal. Winter Wonderland is rather more off-beat, being set in some 'Shangri-La' civilisation located somewhere in the Tibetan mountains.

Being GAC products, these games show both the promise and the limitation of the system. The promise is that anyone with a good idea and a reasonable hand for drawing can produce a commercial quality weighs in toward the bottom end of the scale - OK parser (but no more than OK), limited room for text on screen, and memory constraints.

And of course all GAC games have the same feel - even more so, I think, that those created with The Quill. This has the effect of making poor game ideas look better and good game ideas look rather less original than they might otherwise.

However, the big question here has to be value for money. For an extra fiver or so, you can get a Commodore version of Zork on disk. That really puts the price of these games into perspective. And with punters turning out their own games with GAC and selling them for around £2.50 a throw, plus companies like Firebird and Americana churning out budget releases like Subsunk, who do we have to pay £7.95 each for these two items? Good question. Answers, please.

Good graphics, reasonable puzzles and original plots... but £7.95 a throw? The real question is whether this is value for money.