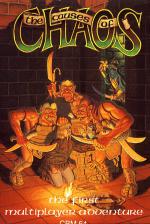 I took a quick look at this game last month, and I've now had time to play it rather more thoroughly. The news, I'm afraid, is not all that good.

The trouble with multi-player games is that a lot of effort tends to be put into the mechanics of role-sharing and not enough into the actual game itself. Causes Of Chaos suffers particularly in this way - you can have up to six players, but the game is hardly enough to sustain the attention of one person, let alone all six.

Readers who caught last month's column will know that the aim of the game is to recover six treasures from the evil Count Vladimir and restore them to their rightful owner, King Arnid, whose power depends on them. Unfortunately, the scope of the game is somewhat limited because of the inadequate parser. Typical responses are 'You can't see it from here,' which occurs frequently and quite independently of the location descriptions. This means that if you're told you're standing by a cliff, entering 'Examine cliff' will, likely as not, result in your being told you can't see it.

Other oddities include getting the response 'You can't while you're carrying it' following the input 'Break lock' while trying to open a door, and the ridiculous episode where, to look inside a 'small, empty case', you must enter it! I'm of average height and I don't think I should be allowed to enter a small case without casting some very tricky spells.

If you ran cope with the parser and can find some other companions who ore equally prepared to make allowances, then you might have a few hours of fun with Causes Of Chaos. The combat routines are pretty basic, and probably not too healthy for your keyboard since they involve hitting a key before your opponent, but they do add some action which is all too often missing from adventure games. If you got this one for Christmas then don't complain, but I think you should think twice before spending hard-earned cash on it.

If you got this one for Christmas then don't complain, but I think you should think twice before spending hard-earned cash on it.