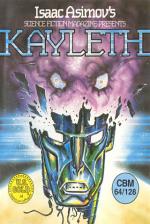 After playing a game like Moonmist, and then loading up a game like Kayleth, the first thing that occurred to me is that the latter is so unmistakably a "British" adventure. And don't think I'm being smugly patriotic - quite the opposite, I'm afraid.

The UK adventure format has now pretty well defined itself in the years after the release of The Hobbit. For your (not inconsiderable) financial outlay you get the split-screen graphics, the cassette versions, the limited vocab, and the poor parsing for your money. Other countries on the other hand - the USA in particular - have gone for disk with all the benefits of increased storage that that offers.

Of course, not all cassette-based games are (ahem) crap, and neither are all disk-based games up to Infocom standards. But the fact remains that, every time I load up a game like Gremlins or Apache Gold or a Quill-ed game I find myself heaving a sigh of anticipatory disappointment. The sad fact is that most UK adventure systems are pretty awful and so the authors have to really struggle with the ol' inspiration to make the best of things.

Stemming from this is a feeling that games like Kayleth, Gremlins, Apache Gold and other typical UK products all belong in a sub five pound price range. So not only do I moan at the inadequate parsers and the shoddy vocabularies - I also wail at the price. Frankly, ten quid for a game like Gremlins is outrageous. And I hate to say it but even Level 9 - whose games come out with flying colours despite the limitations of the format - are beginning to seem slightly archaic and overpriced to me these days.

Anyway, back to the game in question. Kayleth is the latest offering from Adventuresoft and I mentioned it briefly in my piece on this company a couple of months back. Billed as a presentation by "Issac Asimov's Science Fiction magazine" the game has in fact nothing at all to do with this great writer but is in fact the product of Stefan Ufnowski's imaginative pen - one of the co-writer's of Rebel Planet who is now moving on to better things.

I remember having been impressed by Mike Woodroffe's set-up in Birmingham when I wrote about them in the earlier article and saying that, although some of the software from this company had left something to be desired, things were looking up. Now Kayleth has come up and I'm glad to say that I'm not disappointed, but first let's get one or two things straight...

There have been several games released by Mike Woodroffe's companies and they all have two things in common. They all have split-screen graphics, and they all use adventure generating systems (developed in-house) to enable the titles to be produced as efficiently and therefore as commercially as possible. They are in fact typical examples of the UK format of adventure game I mentioned earlier.

There's nothing wrong with that, but consider the implications. First, a game with split-screen pictures that has a picture for every location simply cannot offer as much vocabulary, parsing and text response options as a text-only game. And if it's cassette-based (as most UK games have to be) then you'll get even less.

Second, games released using the same system will have an identity of tone and emphasis that can detract from the individuality of the separate titles.

Put these two points together, and you can come up with some obvious conclusions - which is that at their worst these sort of games can be unoriginal in presentation and limited in gameplay. And in retrospect I would say that all the Brian Howarth games are good (or should I say poor) examples of this - though many became very popular and would still represent good value for money if available as budget titles.

Given the fact, however, that software houses have to earn money in the UK, where government policies and global recession have so reduced our disposable income that we can't afford disk-drives - given these facts, I guess we have to live with the results, which means living with games like Gremlins (ugh), Rebel Planet (hmmm....) and now Kayleth...

But hold it right there, because Kayleth is actually one of the best of these games I've played to date.

First, the plot's a good one with some nice (if rather obvious) twists as you attempt to eliminate the tyrant Kayleth who is enslaving the population and destroying the environment of your home planet Zyron. The game is full of suggestive descriptions that conceal solutions to puzzles or other relevant information and the text as a whole (though necessarily brief because of the pictures) has been carefully thought out.

The parser seems improved on earlier releases of this ilk - and seems to be even better than Rebel Planet. This doesn't mean that its up to, say, Level 9 standard by any means but the responses are reasonably helpful and in some cases will even point towards solutions if you're barking up the wrong tree. Result - enough obstacles to keep you thinking but not necessarily to frustrate you.

Finally, the graphics - since you've got to have them - are great and draw instantly (after a short pause with a blank window). Many of them are animated and some quite strikingly so, with vicious creatures lunging at you, mechanical claws grabbing at you, and AZAP chambers flashing at you. My only quibble with the animation is that the time the program takes in looking after it is taken from the input routine, which consequently can't accept more than about one character typed in per second while animation is in progress. Infuriating if you're a reasonable typist...

Of an expensive and limited bunch of titles that have been foisted by various companies, from Interceptor to CRL, onto the British adventuring fraternity in the last few months, this game is one of the better releases. If you enjoyed, for example, Gremlins, then I'm sure you'll agree with me that Kayleth is a far better adventure - even if it doesn't have the instantly marketable allure of a famous TV or film tie-in to back it up. But alongside something like HitchHikers or Borrowed Time it looks, frankly, primitive.

Alongside something like Borrowed Time this looks, frankly, primitive... But it's actually one of the best of these games I've played to date.