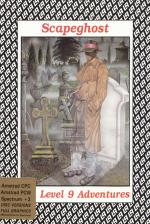 At last! Scapeghost has, after much delay, finally materialized out of the netherworld to the Amstrad, a sad tribute to Level 9 as it will be the team's last game for the CPC. Will it be their best yet or worst, I wondered as I tore open the packaging...

On opening the case I wasn't even sure I had received a Level 9 game at all - no massive novella, excessive instructions or long storylines, just the disk and a poster with the instructions on the reverse side. A strange step for Level 9 which usually goes overboard. In fact, I prefer this approach, although a novella may set the scene for a game it is so annoying having to read, say, the Gnome Ranger booklet, before you can really start playing! (Although I must admit I did enjoy reading it.) Suffice to say, the instructions provided are adequate, although first-time adventurers could be well advised to play Gnome Ranger, Ingrid or Lancelot first, as they have copious instructions.

The plot is original and clever. You play the part of a detective, Alan Chance on an undercover mission to infiltrate a drugs gang. All was going fine until someone or something alerted the gangsters and they killed you and escaped, taking your colleague Sarah as a hostage. Your fellow police falsely blame you for mistakenly tipping off the criminals - as you soon find out at your own funeral.

You have three nights as a ghost to disprove this false accusation, clear your name and gain revenge. You must use your detective powers and growing spirit powers to delay the gangsters, track down their new hideout and bring them to justice.

The game is in three parts, each taking place on a different night. Part One starts at your own funeral and has you coming to terms with your ghostly powers and improving them while making friends with the residents of the graveyard. It takes quite a while to become accustomed to being a ghost - at the start you can't pick up any objects! The graveyard is populated with many ghosts, including one called Joe (the dead barman from the Pig and Whistle) who soon befriends you and gives you a guided tour of the place. You must recruit all the ghosts you meet, and with their help delay the gang.

This section reminded me very much of Ingrid's Back, in that you must perform services for other ghosts before they will do what you want.

The interaction between the ghosts and yourself is very good and they seem almost human... (?)

Part Two starts with you by your grave again. After delaying the gang in Part One you must go to the gang's old hideout and search the place for clues to where they have moved on to. You must then alert the police as to where the new hideout is. There are some very good puzzles in this section, including getting a piece of paper out from inside a chimney...

The final part has you finding the gang. You must free Sarah and then delay the gang enough so that the police can arrive in time.

The game is well-written, and although its subject sounds gloomy and depressing, much of the scarier aspects are dispelled by some awful jokes. The puzzle associated with Edith is really corny but so obvious! It involves ripping up a copy of Time magazine to prove that she has "seen the end of time". The atmosphere is still excellently maintained though, through references to puzzles and your previous life.

The game uses the same system as Ingrid's Back, i.e. a powerful parser supporting OOPS, GO TO etc and graphics on disk versions. The graphics are definitely Level 9's best yet and deserve an award! The devious and original plot was written by Sandra Sharkey (author of Case Of The Mixed Up Shymei) and adventure columnist Pete Gerrard.

In conclusion, Scapeghost is original, has a great parser, atmospheric text, beautiful graphics and some wicked puzzles... Well worth buying, though it is a great shame that this Level 9's last game. An appropriate farewell to one of the best adventure houses ever.

Scapeghost is original, has a great parser, atmospheric text, beautiful graphics and some wicked puzzles.