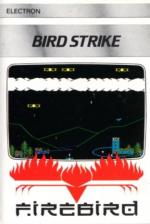 Good to see some reasonably priced software for this machine. Does the quality live up to expectations?

Loading was no problem and accompanied by It's A Long Way To Tipperary just to build atmosphere. This is where Firebird's range wins out; they take care right from the beginning.

When the title screen appears you are told the scene is "Somewhere in Europe, 1914". A well-drawn country scene is set with one or two houses, mountains, clouds above and a churchyard nestling on the right. It's only later that this becomes significant!

Bi-planes swoop down on you one at a time dropping bombs. You shoot back from the ground, hit your target and release a carrier pigeon which you also have to prevent from escaping. You can only destroy the planes by a hit dead centre which is hard.

Successive screens are played against the same background but the planes change, becoming increasingly modern. All the action is fast and smooth providing a game of limited scope but well-executed.

All the action is fast and smooth providing a game of limited scope but well-executed.