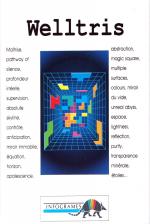 How do you improve on Tetris, the Russian blockbuster that had all us decadent Westerners marvelling at its compulsive simplicity? Well, Infogrames reckon they know how, and have come up with a new, improved version with four walls instead of one, loads more pieces, and some extra rules to keep you on your toes.

The basic principle remains the same. As blocks drift down a wall you can rotate them and move them to fit into those already at the bottom. When you complete a whole line, it disappears.

However, where Tetris had you forming lines on just one wall, Welltris has you doing it with four. You look down into a kind of well (hence the name) and must create lines on a "floor" at the bottom. The blocks slide down the walls and then across this floor, stopping at the first obstruction they encounter. The dimensions of the playing area mean you have less space to work in but can drop shapes from any of four directions - the walls even "wrap" around. Complicated stuff, eh?

What's more, if you leave any part of a shape overlapping onto a wall it becomes unusable until you land another three shapes. This means the game ends when all four walls become blocked off, rather than when the pieces pile up to the roof.

There are three levels to choose from, each of them featuring steadily increasing speeds as you progress. On the first level, the shapes are made of two, three or four blocks. On the second level it's four blocks and on the third level, between two and five blocks. Ouch!

Apart from this, the game is very similar to Tetris in appearance. For every demanding increase in speed on the left of the playing screen you get a brand new picture on the right. This depicts Russian scenes to prop up the inevitably rather plain graphics.

The graphics are far, far better than those of Tetris on the ST. OK, so there's not much to them, but the shapes move rapidly in response to the controls, and are sufficiently clear and well-defined to allow the split-second timing necessary when the going gets tough.

The sound is minimal. There's a pseudo-Russian jingle every time the game speeds up, but after that you're back to some rather basic block-bashing noises.

Tetris was brilliantly simple. Welltris has certainly added to the gameplay and depth of the original, but the result is a game that's no longer simple at all. The strategies are more complex and it requires greater lateral thinking - but it's not the same game any more. Welltris has more features, but in gaining these features it's lost the simplistic feel of the original. And it's really not very easy to tell if you're doing well or not!

However, the responsiveness and playability of the game are much better. Welltris is definitely one for the eggheads, even those new to the ST - you'll take a long, long time to master its subtleties.

Definitely one for the eggheads - you'll take a long, long time to master its subtleties.