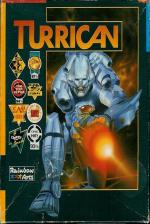 Let's just get this straight right from the start. Turrican is very, very tough. If you're a hardened shoot-'em-up freak with split-second reflexes, a lust for continuous, unrelenting carnage and the kind of metabolism that can cope with adrenaline overload for hours at a time, then you could be in with a chance. Otherwise, forget it.

The plot is as follows. Mogdul has three heads and is an extremely unpleasant person (or people?). He's unpleasant enough to be the cause of all the fears and nightmares of men - and was banished long ago to a far-off place by the heroic Devolon. Well, now Morgul is back. And it's your turn to search out this loathsome being and destroy him forever.

Got that? OK, forget it again. You see, for all practical purposes it doesn't really matter. Turrican is basically a scrolling shoot/explore/collect-'em-up par excellence, where about the longest time you're ever going to have to think about the fuller moral implications of Morgul's actions is about three nanoseconds.

There are five worlds to work through as you go. Three have three levels each, the others two. And each level brings new horrors, puzzles and timing troubles for our hapless hero.

The horrors include bats that dangle from ceilings and then swoop at you as soon as you draw near, huge fists attempting to mash you into the ground and boulders raining down and shattering around you. There are a total of 50 different enemies and no fewer than eight end-of-level guardians to contend with.

The puzzles are principally ones of timing, avoiding obstacles that you can't destroy in advance but which can certainly take a chunk out of your vitality if you so much as put a foot wrong. Get hit by an enemy, or stand in the wrong place at the wrong time, and your energy bar takes a nosedive. Let it get to zero and... well, you do get three lives.

Mind you, if the enemies are nasty, you - potentially - are even nastier. Predictably enough your standard weapon is OK for the odd pot-shot, but not really up to the heavy-duty Morgul-mangling you're heading for. OK, so if you keep the fire button pressed your gun produces a sizzling lightning bolt which obliterates all within a certain radius for as long as you keep the button pressed (you can direct it with the joystick), but even that won't keep ou alive for long - there's a gap of maybe one second between pressing the buttonand the activation of the bolt, which is long enough for the assembled hordes to wipe you out several times over if you haven't chosen your moment carefully.

Fortunately you do have other weapons at your disposal. You can lob grenades, drop mines, activate special "smart bomb" energy bars and even transform yourself temporarily into an indestructible gyroscope which rolls around, scything through all and sundry like a runaway chainsaw until there's nowhere to roll any more. And there's more (you're joking!): big fat juicy diamonds keep turning up for you to collect. Stack away 300 and you gain another life.

On top of all this (here we go), there's the collectable weapons. Shoot the bouncing bonus symbols then jump into the letters left behind for extra goodies. Such goodies include multiple shots, lasers, temporary invincibility, vitality and extra grenades, mines, energy bars, gyroscopes and even lives. All extremely useful if you're to make any decent progress before the time limit runs out. Oh, I didn't mention the time limit...?

The graphics are great, with atmospheric colour changes as you drop down into the bowels of the earth, super-fast animation and scrolling that just never seems to slow down and a whole host of nice touches. One of these is that your hero's gun moves visibly from side to side as he runs, enhancing the animation one hundred per cent. Sound, too, is great. The FX are competent, but the soundtracks - over 20 of them in total - steal the show.

If by now you get the impression of a completely over-the-top, action-crammed bloodbath, then you've just about got it right.

The good news is that Turrican is the shoot-'em-up elevated almost to an art form, with more of everything and happening faster. Never before can there have been so many different weapons for wiping out aliens, or so many assorted nasties to try them on. It's all been done before, but surely never quite as well as this.

The bad news is that, while Turrican is superbly put together, it is very fast, very tough and very complex. Many of the extra weapons require keyboard input, and the sort of reflexive actions needed to activate them in the heat of battle would take many, many, many hours of playing to hone. This isn't a game to pick up and play for the odd five minutes - this game is a war.

It's all been done before, but surely never quite as well as this... This is the shoot-'em-up elevated almost to an art form, with more of everything and happening faster.