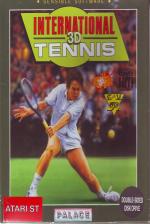 Play Palace's 3D Tennis for five minutes and it seems just too fiddly and too damn hard. Can this, you wonder, be the tennis sim the rest are raving about? Play it for an hour, though, and you begin to realise that those complex joystick moves can become reflexive. The turning point comes when you smack the ball straight into the corner of your opponent's court, 30 feet (in tennis terms) from the lack desperate lunge of his racket. Play it for a day and you're hooked.

To help you through those trying early games, the instructions give you four brief lessons in ball control, while the program itself has four skill levels. On the AM (Amateur) level there's almost nothing to worry about. You just click the Fire button to serve, then pick your position on the court with the joystick. When your opponent hits the ball, your control is limited to moving towards or away from the net - the computer lines you up for your shot. To make things even easier, your player flashes when it's time for you to whack the ball and all you need to do is press the Fire button.

Lesson Two has you experimenting a little more. Move the joystick as soon as you've pressed Fire and you can control where the ball goes in your opponent's court. Now we're cooking! For Lesson Three you have to select the SP (Semi-Pro) level, where you get to experiment with Supaserve. Now you can control not only where your serve lands but also its power, governed by how long you keep the Fire button pressed.

The next skill level is PRO (Professional), the same as Semi-Pro except your player no longer flashes to hint that maybe you should hit that small furry sphere whizzing past you at Mach 3. By now, though, your timing should be good enough to let you judge your shots for yourself.

It doesn't end here. Lesson Four is all about Supaspin, a clever feature that comes in on the top ACE level and enables you to apply topspin or backspin to your shots. Hit the ball as normal (Fire, then joystick to aim) and then while the ball is in the air push the stick forward or back according to what sort of spin you want to apply. Now we really are talking complicated joystick control - but still perfectly learnable.

And there's more. Your opponent can either be the computer or another human, and if you want to practise your tennis skills against your plastic pal before risking ridicule in public, the program offers you fifteen different opponent levels. Oh, and you can play on four different surfaces, and either one game, a tournament or a whole season. Choose a season, and there may be some tournaments you can't enter unless you've selected a high enough skill level!

First impressions of 3D Tennis are not promising. With its antediluvian wireframe graphics and almost complete absence of background detail, it looks like a BBC program from 1980, a Driller on legs. The true power of Palace's 3D system becomes apparent when you experiment with the viewpoint feature. In play, the ST's ten numeric keys (0-9) offer ten different angles to view the action from - behind your player, behind your opponent, from the side, long distance. It takes a while to find the one that suits you best, but you can't say you don't have a choice.

Sound effects comprise some realistic noises as the ball strikes the racket or ground. Most impressive of all, though, is the sound of a Wimbledon umpire keeping score - sampled no less!

Palace have made a huge effort to produce an accurate and demanding tennis sim, and succeed brilliantly. The only snag is, as in the real game, a complete dunce can't expect to pile straight in and be on the Centre Court at Wimbledon before the day is out. Passing Shot is easier, Pro Tennis Tour looks a lot sexier, but International 3D Tennis makes the rest look like amateurs.

An accurate and demanding tennis sim, and it succeeds brilliantly. In fact, it makes all the other tennis games look like amateurs.