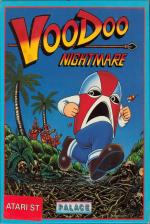 Some subjects explored by games are just certain to provoke criticism from sensitive ST owners, so Palace had better bolt down the hatches and prepare for an avalanche of complaint: anyone remotely disturbed by black magic is going to blow his top when he sets eyes on Voodoo Nightmare. You've had your warning, now flip the page if you're not up to it.

You play the role of Boots Barker, a two-legged chap with a face like an African death mask as the result of an evil witch doctor's curse. Using this character you need to lift the curse by collecting eight pins and sticking them in an effigy of the doctor. The main objective of the game is therefore to locate the eight pins.

Voodoo is set in a jungle and hidden in the foilage are five temples: Spider, Snake, Eagle, Ape and Lion. You need to work your way round the jungle, finding and exploring the temples in order. Each temple isn't just a single room but many different ones with a variety of exits - so when you venture inside it's a good idea to draw a map to help you find your way back out again. Collect all the jewels inside a temple and the temple god rewards you with a pin and a special power. The Snake god for instance grants you immunity from snakebites - and since you need to collect five snakes in the jungle to enter a later temple, this is very important.

There are hosts of enemies in the game. Step inside the temples and you have to watch out for giant snakes; wander round the jungle and you need to avoid apes and other malicious mammals.

Voodoo Nightmare is presented from a 3D isometric viewpoint. The jungle visuals are unrealistic but colourful and exciting, while by contrast the temples are dull and boring with only a few gems and spiders to liven up the rooms. During the game you move through day and night, and on the Atari colour monitor - often criticised for being too dark - night is almost pitch black, though on other monitors there is enough light to work your way round the maze. Complementing the graphics are some simple spot effects, and an ST sound chip tune, if you really want it.

This is an unusual game, not least because it careers away from the usual game subjects: there are no aliens from outer space or dragons lurking around this scenario. Instead, it's all down-to-earth superstition - which so-called moralists are certain to claim they're offended by, and which is therefore certain to do well.

Voodoo Nightmare is a fun game to play, particularly if you like your games to have a vague puzzle element to them. Controlling the central character in most games with an isometric perspective is tricky, however, and Voodoo Nightmare hasn't succeeded in remedying that problem: to move Boots around the maze of rooms and pathways correctly you need to hold the joystick at an angle. Screw up at a vital point and you're going to fall straight into the mouth of a waiting spider.

A fun game to play, particularly if you like your games to have a vague puzzle element to them.