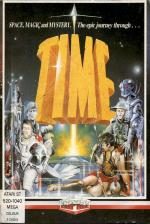 The adventure has been a popular genre for years, but as programming skills concentrate on the all-conquering action game, so more and more adventures include action sequences. Time, however, harks back to the original formula, where a map and a sound memory get you further than good joystick technique.

Despite its original 3D environment Empire's last adventure, Sleeping Gods Lie, never really took off. Now hopes are pinned on the more polished Time, with an unusual plot that has you exploring historical periods and meeting classic heroes.

Set in a space station orbiting Earth in the year 2047, Time begins by instructing you to see the director of the Space Station, who then passes you on to someone else (good to see they've got the bureaucracy up and running). The plot unfolds as you talk with different characters. But, as you'd expect, you only get to meet them by overcoming obstacles.

You soon learn from a research scientist on Earth that an android (or MEK) is on your satellite and he's about to start self-replicating: this could be The End of Civilisation As We Know It. You're in a race against time to save the planet.

To save Earth, you've got to visit five centuries using the time machines found on your satellite: you need to find a window in your filofax to see Merlin ye Wizard, Florence Nightingale, Leonardo da Vinci, Julius Caesar and Confucius.

The game directs you to each of these in turn, so there's no chance that you can come across someone by accident. Merlin's first on the appointment list, and if you play your cards right he gives you a magical amulet that's charged up whenever it's given to powerful characters - the key to winning the game. The discharging process neutralises one of the MEKs on the spaceship. Thus, by visiting all five characters in turn and returning to the spaceship with a charged amulet, you can gradually remove the mutant androids.

The environment in which all of this is played differs from other adventures: the action occurs in a small window, with icons underneath to control your character. As you direct him around the space station, you meet other characters with whom you interact to obtain valuable information. Often just passing a character provokes a small burst of speech, though this is rarely helpful. By clicking on a TALK icon, however, you can communicate with the character and obtain more useful assistance. Ridiculously protracted conversations may even result in being given an object to help you out later in the game.

Besides the movement icons which offer two walking speeds, there are numerous hand icons to pick up objects, put them down and use them. As you move through the adventure, an eye icon opens to inform you that you're close to something that can be examined. This is essential, because many of the important items you pass aren't visible in the window. By clicking on the eye icon you're given a close-up view of the item, and then you can select to store or ignore it.

You can only hold four items at once - and since you pass numerous red herrings, you need to be careful you don't stop something important for the sake of something useless.

Animation is used sparingly, but there's enough there to convey the impression that things are happening. You direct your character using the arrow icons to walk him left or right, and the background scrolls until you reach a door, when a new backdrop replaces the old one. Occasionally you encounter extra scenes which include special animated effects such as the transporter: panels in the wall whizz past to suggest movement.

The main screen features a backdrop over which the playing window and icons are placed. When you move into different time periods, this backdrop changes to a relevant scene for that period.

Graphics are very colourful and well defined. And, while the characters don't look entirely believable and tend to moonwalk rather than walk, you do get that all-important feeling of being there.

All sound uses the ST's sound chip. After a long intro tune you hear infrequent spot effects such as alarm bells. Not very rousing.

Time doesn't just simply plonk you down in a space station and leave you to get on with it. It directs you through the adventure, presenting obstacles which you need to overcome to progress. These obstacles often require you to backtrack a few steps and either find an item or continue a conversation with someone you previously ignored. This makes the game great fun, particularly for someone who doesn't enjoy spending hours lost in a section of the game which is no use to you whatsoever. It does, though, make it less exciting for the adventure enthusiast who knows the ins and outs of every adventure ever released.

The environment is simple enough to be learnt very quickly, and that's important, because the last thing you want to do is spend hours working out how to interact with the game. But because of this, the problems soon begin to appear too similar and too easily solved.

Not that Time is boring, because with a wide variety of backdrops (the game comes on three disks), it's surprising just how tempting it is to advance into different time phases.

Great fun, particularly for someone who doesn't enjoy spending hours lost in a section of game which is no use to you whatsoever. It does, though, make Time less exciting for the adventure enthusiast who knows the ins and outs of every adventure ever released.