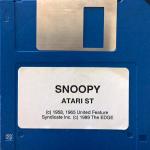 There's no-one more obsessed with releasing cartoon licences than The Edge and this time they've turned their attention to the biggest comic strip hero of them all.

The Edge's best hit was with the original Garfield game released last Christmas. But they steered off of the arcade adventure path a few months ago when they released the follow-up - Garfield: A Winter's Tail, which was an all-action game. Now they're returning to their original formula for this latest release.

The objective is a simple one - track down Linus' blanket and carry it back to the poor fellow. The task is complicated by the fact that you must use various objects in specific circumstances if you're to get through the game successfully and return the emotionally retarded Linus back to a full sense of security.

The environment constructed consists of a street with several houses for you to explore. As you wander through these, you come across such items as footballs, a watch, scoreboard and even a cookie jar.

These must be used to overcome problems, but since you can only hold one at a time it's not just a matter of picking them all up and using them whenever you need to.

There are two blankets in the game but you only need to find one to win. The theory is that, since all the objects are in the same place each time, it doesn't matter if you locate one blanket because there will still be another one to discover.

The game is arranged as a series of static screens. As Snoopy moves out of the end of one screen, he pops up at the start of the next. As a result you can't always see what's happening just in front of you.

If you thought games were becoming more and more sophisticated in the graphics department this one proves that theory wrong. Snoopy is the only character you can depend on for movement. Charlie Brown, Lucy and the others rarely move while you're around, but if you step off somewhere else for a moment they'll suddenly dash forward several frames.

What's even worse is the speed of the movement, which does take place; the real Snoopy could have all four legs sawn off and still move faster.

Music or spot effects can be selected. The music is nothing exciting but at least it gives you something to listen to while Snoopy is limping from one side of the screen to the other.

You've seen the screenshots by now and probably though it looks an addictive and cuddly licence - presumably what The Edge are banking on. It's hard to see anything else which might even remotely encourage people to splash out 20 quid on it.

By far the biggest problem is the ridiculously slow pace at which things move. Since a vast number of other games have handled considerably more animation without any hiccups, there's no excuse for such problems.

If you still insist on playing after seeing how slowly it runs then you'll only suffer further annoyance. For a start, the adventure isn't nearly large enough and because of the way the game is constructed you end up exploring the same scenes and the same territory over and over again.

Then there's the comic element - where is it? Schultz's cartoon hero was brilliantly funny but the only joke here is the lack of programming accomplishments.

Arcade adventures have moved on a lot and it takes more than just "find object X to solve problem Y" to make a good game nowadays.

It also takes more than just having a famous lovable cartoon character as a hero to make gameplay interesting. Snoopy would make a great slideshow but, as a game, it's a completely wet blanket.

Snoopy would make a great slideshow but, as a game, it's a completely wet blanket.