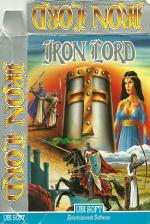 Rumours of the imminent arrival of Iron Lord have been rife for what seems like decades. Last Christmas previews and adverts appeared, but after a couple of months everything went quiet again. Now, at last, it's here - but has the delay proved fatal?

Iron Lord, it was said, would be one of the great all-time adventures, and it's certainly had an eventful history. After mammoth programming problems last year, it's been delayed so long and so often that we started to wonder if it had slipped out on the quiet. When it was previewed at the PC Show, for the first time in '87 and then again in '88, it was the graphics that wowed everyone. But ince then there have been so many graphically superior games, that challenging gameplay has, thank goodness, come back into fashion.

The objective is the usual hackneyed stuff: assemble an army and do battle against your evil uncle, etc. Most of the game is decided on a full-screen map featuring castles, villages and abbeys, linked by roads. You begin in a centrally-located castle. Using the joystick to move a hand around the screen, you click on a place to visit. If it's next along the road, in either direction, a knight rides his horse there.

Once you're inside the village, the screen clears and a small map appears in one top corner. Here you see a four-directional scrolling view of the buildings, trees and walls in the area. You move a tiny dot of a knight around these, discovering what's going on and where. By stepping up to the front door of a house and pressing Fire, you get information from the occupant, stumble upon a shop or even find yourself in a game of archery.

Iron Lord doesn't just pit good against evil, though. As you stumble across people, they're given distinctive characteristics, heightened by a half-screen picture of them. For example, some characters warn you about others and a message bar under the map gives advice on who's behind the door.

It doesn't matter who you meet, you're always given the option to talk or but goods from them. Buying goods brings up a list of the things available - if any. The objects for sale depend on the place you're visiting. Going to the herbalist brings up a long list of herbal medicines, while the shopkeeper gives you just about anything - for a price. Since the whole point of your mission is to trade for soldiers, many of the items are used to buy men for your army.

Conversing with people is simple: two arrows let you run through possible sentences and by clicking on them you issue the question and the character answers. You then either reply or leave. This gives you the feeling of participating in a conversation.

Several action sequences liven up the game, the first of which is the archery scene. You're presented with three icons to control the height, direction and force of your shot. If you don't hit the target you're shown how far off you were. If you do hit it, you see a close-up of the target to determine how far off-centre you were.

In the gambling hall action sequence you can take part in an arm-wrestle, play dice or buy alcohol. Try arm-wrestling and you must beat nine opponents separately by waggling your joystick from left to right as fast as you can. If you need to replenish your gold reserves you can risk playing dice. Choose the stake for all the players and then throw. Get a seven and you keep the kitty, less than that and you lose, more than that and you keep your stake.

As you leave the villages you risk attack from an assassin. If you get caught, you compete in a life or death bout of fencing, arcade style. Win and you can carry on, lose and you die.

When you have at least one regiment, you can go to the central tower of the castle and enter the final battle. This section is divided into turns. In your turn, you have six moves to shift or join your troops. By rushing onto the same ground as your enemy, you cry for war. The key to this section is spreading your troops out.

Win here and you're through to the labyrinth where you have six levels of a maze and must find the exit for each level. In between levels you compete in a simple arcade phase where you kill acid-bearing monsters to get to the top of the labyrinth.

Few games have had such effort put into graphics. Though the majority are static, they add a great deal of atmosphere to the game. It's a shame that otherwise faultness graphics have been let down by a tiny window showing an overhead view of villages as you wander around. If this area weren't central to the game, you could imagine it had been added at the last minute.

The action sequences are great fun, with fabulous visuals keeping it exciting. But it's rare for there to be much animation on screen at once, so it's never edge-of-the-seat stuff.

As with Ubisoft's other release this month, Twin World, sound is absolutely brilliant. There's plenty of music and neat spot effects all over the place to keep things aurally interesting.

The instant you see Iron Lord you recognise something of the Cinemaware style. In fact, it looks unnervingly similar to Lords Of The Rising Sun (currently on a machine called the Amiga, but due soon for the ST).

With essentially three levels of action - gathering troops on the map, going into battle and getting lost in the labyrinth, there's plenty to do. But somehow they don't hang together terribly well, and by the time you get as far as the labyrinth all credibility in the characters and plot is lost by the strange monsters. Even though the plot has found a way to justify them, they never really belong in Iron Lord.

Nevertheless, it's a game bulging with interest. When you're bored with gathering troops, you can go into battle; get fed up with this and you're into the labyrinth. If you die before complating the mission you can go back and put more effort into building a bigger army.

Had Iron Lord been released a year or two ago, the graphics alone would have guaranteed its success, but now there needs to be much more to a game. Iron Lord has it. And even though it follows where Cinemaware went first, there's no way you could say it lacked originality. With three very different and long-lasting levels, you'll be well impressed.

A game bulging with interest. With three very different and long-lasting levels, you'll be well impressed.