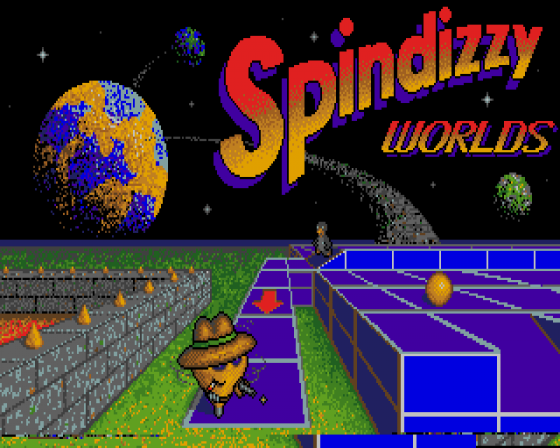 Activision may be (indeed are) withdrawing from the home computer scene - but that hasn't stopped them going out with a bang. At the time of year when licences and follow-ups rule the shelves, ladies and gentlemen won't you please meet, greet and go "Woo!" for Spindizzy Worlds, follow-up to an unfairly neglected classic...

The original Spindizzy fell victim to a marketing blunder: it was so poorly advertised that nobody knew much about it. When the reviewers got their hands on it and told everyone how great it was, people slowly started to buy, but it never reached its full potential. Now here's the sequel, Spindizzy Worlds - and once again it looks like ST Format has to do the job the adverts haven't begun yet.

Spindizzy Worlds puts you in charge of a spinning character known as GERALD (Geographical Environment Reconnaissance And Land-mapping Device). The game is split into a series of 23 worlds. Within each world you can find anything up to fifteen levels of action as well as numerous bonus screens. The worlds are located in clusters and you can search through a cluster for the world you wish to tackle. In this way you aren't forced to constantly replay a particular level over and over again. 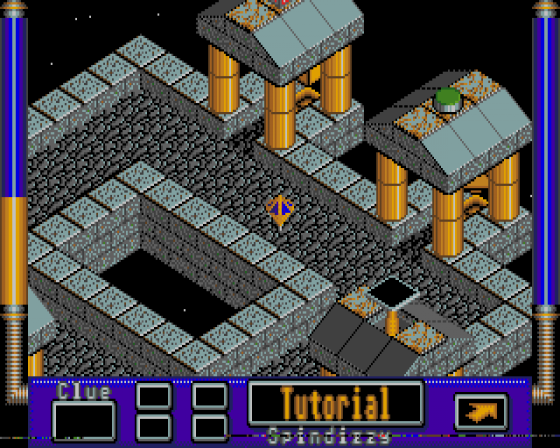 But Spindizzy isn't easy. Although the objective is to solve the puzzles contained in each level, the major headache comes in controlling the game. Each of the levels is arranged as tiles connected together. In early levels these tiles are surrounded by coloured railings, but as you advance they quickly change into tiles which slope, tilt or even move. Without the barriers to stop you, you can easily fall and perish.

A practice section enables Spindizzy newcomers to get to grips with the control style of the game and try out some of the problems. For example, you can't jump but you can leap over gaps if you take a running jump at a platform which slopes upwards. Other practice worlds give you a time limit within which to race round the level collecting precious gems, flags or spheres. Alternatively, you can scale steep slopes or tackle the trampolining tiles which throw you into the air when you land on them.

The game proper presents you will all these obstacles and the added complication of switches that activate and deactivate certain areas of the game, enabling you to advance. For example, in one of the levels you need to work your way into a central columns protected by four giant heads. Hit a switch in the level and one head rises, but there's a choice of three switches and only one head gives you access into the column - behind the other three are lethal spikes. In the example below you can see how the switches are used to call up pathways through the level. 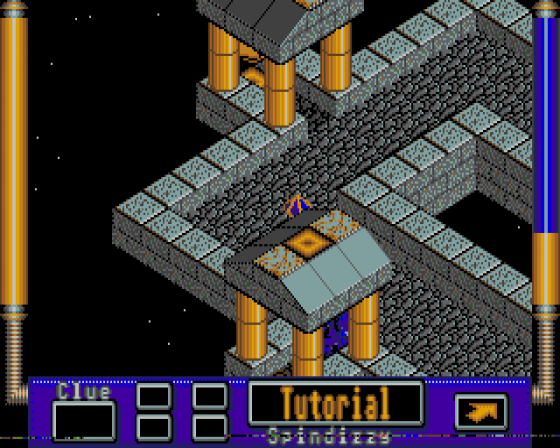 As you explore the different worlds, these problems become increasingly complex and really test your skill at controlling GERALD. You need to work out ways to turn certain switches on or off which may necessitate moving across narrow tiles or leaping giant divides. All hopelessly addictive good fun.

GERALD spins constantly during the action. The sprites used to achieve this are small and other sprites in the game are similarly tiny. The levels comprise all manner of switches and raised tiles. The switches are pressed down when you move over them and this is very effectively represented, but the appearance of the tiles is the most impressive. As you can see from the screenshots they really give the impression of being slanted, so you can work out with ease if you can use the slant to your advantage.

A sound chip tune accompanies the action. This was created using Microdeal's Quartet and is a very accomplished soundtrack.

The real beauty of Spindizzy Worlds is the way you're gradually exposed to the game. A section of easy worlds tests your skill at controlling GERALD and presents you with simplified problems to overcome.

When you feel you know how to control GERALD you can tackle the harder worlds, and this is where the game really takes off. You have to work out odd switch combinations, struggle with difficult terrains and seek out precious gems for extra fuel.

The concept isn't original and the graphics aren't spellbinding, but it's certainly going to provide you with hours of absorbing entertainment - and isn't that what matters most?

The concept isn't original and the graphics aren't spellbinding, but it's certainly going to provide you with hours of absorbing entertainment - and isn't that what matters most? 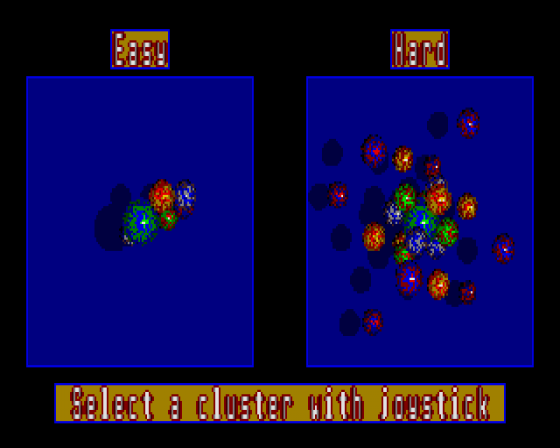 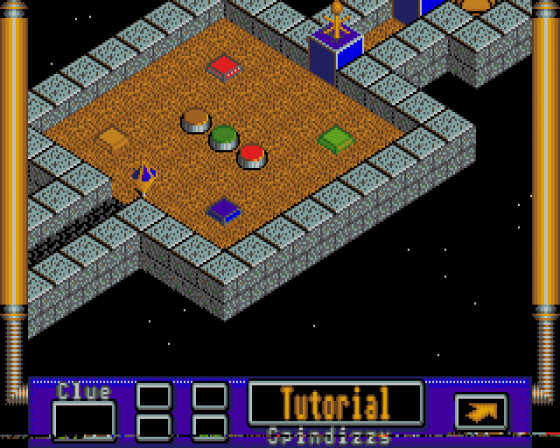 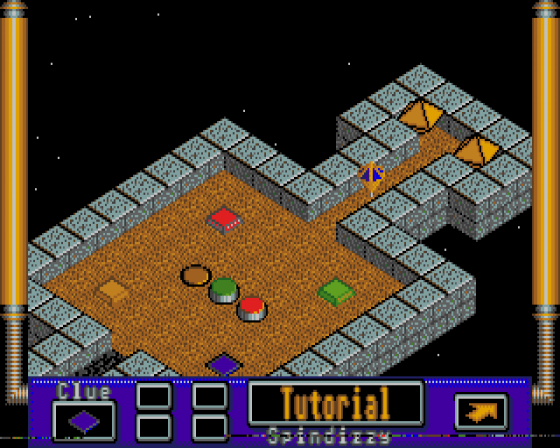 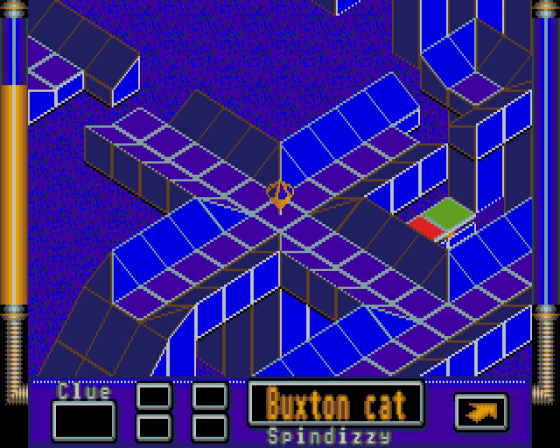 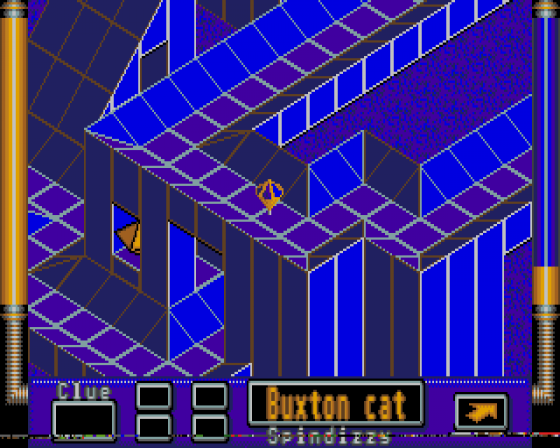 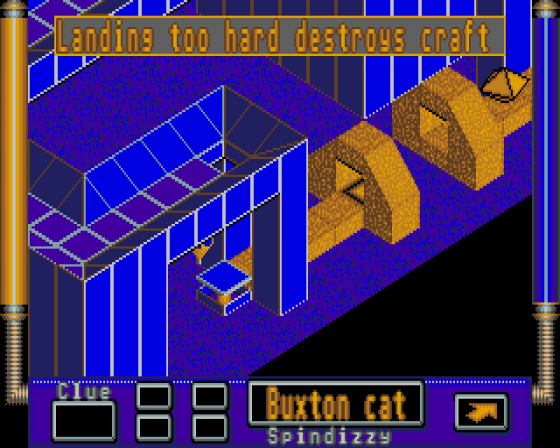 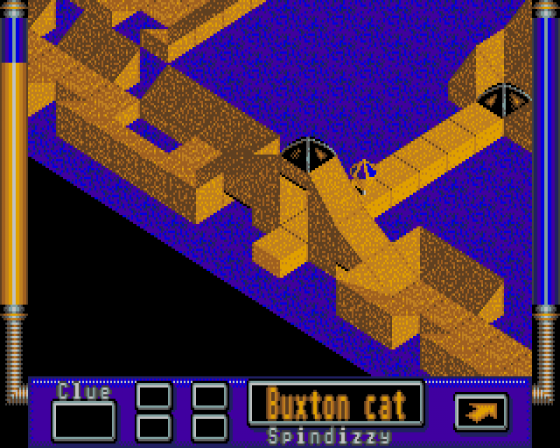