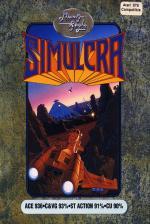 What does it take to make a good shoot-'em-up? Essential ingredients include an outer space setting, battalions of mutant aliens and hosts of collectable lethal weaponry. Take this lot and toss in some nifty scrolling and voila! You're created an instant trigger-happy masterpiece.

Simulcra has all these qualities and more; instead of the traditional overhead view that stems back to Space Invaders, it introduces 3D aliens, a 3D landscape and new objectives into the tired and hackneyed genre.

Simulcra is arranged as a series of scenarios and within each scenario are five matrices. Each matrix is essentially a complete level in itself. When the game starts, the matrix pops up to indicate where you are, your direction and the difficulty of each level. It's your unenviable job to work your way from one end of the matrix to the other.

If it sounds like plain sailing and just your kind of game then go away and slash your wrists now. This is your worst nightmare magnified ten times. Besides hurling missiles at the monstrous number of alien craft heading your way, you also need to break down special energy barriers which divided the matrix into partitions. Destroying each one isn't just a case of catapulting a few well-timed missiles into the awesome wall, instead you need to track down an elusive energy generator and blast it to smithereens.

This formidable challenge is fought in outer space and set on a huge series of connecting tracks which essentially "float" in space. You command a Simulcraft, capable of moving James Bond-style either by land or air.

When you move by land you need to stick to the tracks which weave around the matrix.

If you choose to fly you need to make certain you're equipped with wings (enemy craft blast them off if you're not careful). Flight is the fastest way to hurtle round each matrix but it's also the hardest. You can fall victim to flying enemies and you must be careful not to crash into barriers.

Your progress round the maze is hampered by trigger-happy aliens, enemy installations and stationary obstacles.

Shooting many of these turns them into special pods. If you pick up the pods before they disappear, you can collect the bonuses they offer. Some reward you with extra points; others give you new lives or extend the abilities of your craft. You can, for instance, buy a radar to scan for enemies or wings to replace those lost in battle.

It's the visuals which prevent this from being just another seen-it-all-before shoot-'em-up. Arranged as coloured connecting tracks which extend into the horizon, they give a real impression of depth.

When you want to move left or right, tap the joystick in your intended direction and the entire display revolves round. Stop moving the joystick and the screen stops moving. Now push forward on the stick and you launch yourself into the great unknown.

Enemy installations, alien craft and even pods are represented as a series of 3D plains in a similar manner to those found in the Freescape games such as Driller or Castle Master.

Sound effects are confined to spot noises which emerge whenever you're under attack, or when you fire weapons.

Simulcra adds exciting new life to a game style which is frankly dead and buried. With hosts of collectable weapons and two forms of movement - air or land - it has enough to keep you returning to the game for months. If you're not into high-speed joystick action you're not going to fall for this one, but there's no disputing that it adds an original angle to the most addictive genre of all time.

Adds exciting new life to a game style which is frankly dead and buried. With hosts of collectable weapons and two forms of movement - air or land - it has enough to keep you returning to the game for months.