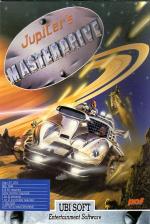 Cast your mind back four years and you may recall a game called Super Sprint where you had to race little cars around increasingly difficult circuits. Masterdrive is a similar racing game but it's graphically way ahead of that oldie. The gameplay is much deeper too: you can bolt stomach-churning armour and guns to your car and collect more fuel and power as you go.

It's the Fifth Millennium and violent sports are banned. A fun-loving Corporation has designed remote-control cars you can race from the comfort of your Fifth Millennium MFI sofa. The cars race on nine circuits, each situated on a moon of Jupiter.

You start off with a wad of cash and get more depending on where you come in the races. You can beef up your car's specs with your dosh and prepare yourself for the next - tougher - round. You can also pick up extra goodies - like fuel, repairs, and ammo - as you drive. Beware though of hazards like glue, ice and force fields, and of course your opponents!

On the opening screen there is a pretty picture of Jupiter and its nine moons. You can explore these moons without getting into the full tournament by selecting the practice mode - simply choose the moon you want to try. In this mode you can keep racing as long as you have the cash to enter the races.

In the tournament mode you start on the easiest moon first and then gradually go on to the tougher circuits. After each race there's a bonus time trial where you compete with one other car to pick up bonuses. If you run out of time in either the race or the time trial, then it's game over.

It all seems easy enough at first, but it's Jupiter to a brick that you aren't going to finish the tournament on your first go.

The graphics don't look much at first glance, but you soon find that there's been a lot of attention paid to detail: each circuit is different in layout, obstacles and driving characteristics. There are also ice-tracks, deserts, and desolate crater-strewn landscapes to negotiate. The cars move quickly and smoothly, and slide about in an impressively realistic - and frustrating - fashion.

Sound consists of a suitably menacing title tune, jaunty between-stage jingles and good in-game effects which complement the action well. A bit of digitised speech might have spiced it up a bit, though, especially in the shop section, where a bored-looking alien taps his finger on the counter waiting for you to decide what you're going to buy.

Jupiter's Masterdrive grows on you the more you play it. At first, you can manage just driving flat out, not buying any new equipment and watching your cash pile up. But once you get to the third or fourth level, you start getting left behind and must invest in some goodies for your car!

Best of all is the simultaneous two-player mode. This keeps you racing long after those computer opponents have got boring. Basically just another racing game, but with more depth and better graphics than most.

Basically just another racing game, but with more depth and better graphics than most.