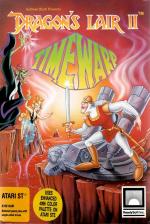 After rescuing the voluptuous Daphne in the original Dragon's Lair and settling down to live happily ever after, you've now lost the bimbo - er, princess - to the evil Wizard Mordoc. He's whisked her away to a "wrinkle" in time and intends to marry her - unless, of course, you can rescue her again. I don't know...

You play Dirk, the gormless hero, who's sitting down to breakfast with his family when his whiplash-tongued, mother-in-law brings the news. Leaping onto the breakfast table, the hippo-sized bonecrusher tries to flatten your head with her rolling pin. Avoid Daphne's mum or perish before you've really begun!

Dragon's Lair 2 follows the format of the original Dragon's Lair. There's a number of short animated sequences and you must make the right joystick move at the right time or meet a hideous and grisly end. In the case of the first scene, that means pushing left with the joystick just as your mother-in-law raises the rolling pin and says, "again".

From there you find yourself on a castle drawbridge. In the castle moat some ominous green tentacles stretch you like an elastic band if you don't think fast. In this instance you need to pull down then push left.

Now you are safely inside the castle. Well, perhaps not safely. Peering round a corner, you see a large snake creep up behind you. You have to whack it on the cranium with your trusty broadsword at exactly the right moment, then move after it to avoid that dreaded rolling pin. And so it goes on for 46 death-defying scenes until you rescue Daphne again.

Dragon's Lair 2 isn't really a game at all - just one of those horrible old-fashioned linear trial-and-error adventures, but with some flashy graphics to spice it up. It's more of an interactive cartoon par excellence, an adventure that you don't just watch, you take part in too!

The graphics are simply stupefying - they really are just like a cartoon, in both the detail and the high quality of the animation. But, of course, this isn't a miracle in itself because all they've had to do is link a series of specially-drawn stills into an animation for each scene. What's more, the interaction is extremely simplistic as a result. Nevertheless, Dragon's Lair 2 still looks absolutely stupendous. It even utilitises the STE's enhanced colour palette.

Sound, too, is excellent. There's a nice soundtrack and excellent digitised speech to accompany the animation. The price for all this graphical and aural splendour though is £45 and six disks!

It's a tough one. As a game, Dragon's Lair 2 is visually stunning but as thin as your wallet after you've bought the damn thing. Find the right moves for each scene, and you're through it. It's not easy, though, because in a five-second sequence, and with half a dozen moves at your disposal, the possibilities are huge. But this just makes the game more frustrating. There's an incentive to see what happens next, and that keeps you plugging away. But get to the end once and you're not likely to want to pay it again.

As a game, Dragon's Lair 2 is visually stunning but as thin as your wallet after you've bought the damn thing.