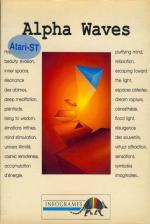 The latest epic from Infogrames has you doing a lot of bouncing, directing your little craft around a multi-room 3D environment where the only way to get from one room to the next is via doorways in the wall. Unfortunately, these doors are seldom at floor level, so you have to head for the coloured tiles. These tiles act like trampolines, bouncing you high into the air - and giving you enough altitude to head for the next, higher tile and eventually the doorway.

Altitude is the key. This means you need to hone your jumping skills to perfection. Leaping from tile to tile needs good timing and steady nerves. Miss a tile, and a stomach-churning plunge to the floor below ensues, followed by the long plod in search of another tile to get you started again. When you do at last reach an exit, there's a nice little Jean-Michel-Jarre-style jingle as a rewarding pat on the back.

All the rooms in the game are different. Some contain irritating little beasties that knock you off course, others contain crackling laser bolts that can fling you high into the air. One room has a hurricane which completely knackers your control. I don't like that one.

Other rooms have rather clever little puzzles. One in particular is called "Seven Chances," and the only exit is high in the opposite wall - with no tiles to bounce you up there. However, there are seven balloons. Bounce onto one of the balloons, burst it and you are carried high into the air. For a few seconds you have enough altitude to aim for the exit. Miss, and you plunge to the floor to try again. This time, of course, there are only six balloons left. See?

Infogrames describe Alpha Waves as "a completely New Age experience where the pleasure of play blends with feeling and dream." When you choose to play it as a game, it's a simple case of collecting every single light crystal in the complex - 256 rooms in all. As if that's not enough there's also a time limit which is extended by one minute each time you exit a room and a further minute with every 10,000 points.

Alternatively, you can play Alpha Waves purely to generate a particular state of mind. In this ("Emotion") mode, the scoring goes out the window, and you can take all the time you want exploring Infogrames' "virtual" universe. At the start of play you select the mood you wish to generate in yourself and you're then plonked down in a particular zone of the complex, which is colour-coded for that mood. The zones are the same in the game option, but adrenaline-soaked arcade nutters are going to be less receptive to subtleties like that.

The 3D graphics don't impress particularly: the overall effect's reminiscent of an anorexic Driller. They do move quite fast, however, and their speed makes the game very, very playable. And the 3D effect works well enough so that the higher you go, the more worrying the drop - don't play this game if you suffer from vertigo!

The version of the game we saw was an early one with no soundtrack. In-game effects are limited to wall-bumping thuds, tile-bouncing boings and that synthesised jingle when you leave a room. Let's face it, what else do you need?

Alpha Waves is weird enough to have you reading the manual three times over, but once you get past all the guff about "New Age experiences" you find yourself playing a rather excellent 3D arcade/exploration game with puzzles requiring both physical and mental dexterity. You have a huge world to explore, and one that can be navigated either as an arcade game or, according to Infogrames, an exercise in mind-alteration. Alpha Waves is more than good enough without the hocus pocus. Huge and mesmerising, it'll have you hooked within minutes.

A rather excellent 3D arcade/exploration game with puzzles requiring both physical and mental dexterity.