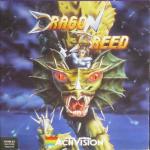 It's nearly Christmas and, as you'd expect, coin-op and film licences are ruling the roost. One of the big surprises is the types of licences that are being converted: software publishers are increasingly opting to buy the big arcade names without giving any thought to the programming limitations of the home micros. Licences such as Crackdown, Dynasty Wars and Dragon's Lair have been translated into ST games - but at what expense? They can rarely compete with the dedicated hardware of coin-op machines so the result is often - though not always - an inadequate game with exciting visuals but very poor playability.

A few years ago everybody would ahve said it was impossible to turn Dragon Breed into an ST game. The coin-op is a fairly straightforward shoot-'em-up but differs from its contemporaries because you ride an invincible dragon through the game. You can knock out installations with the dragon's tail and even coil yourself up in it for total protection. Massive aliens and eight-way scrolling are the final touches to make it a game-player's dream - and a programming nightmare.

Surprisingly, the ST conversation is remarkably similiar to its coin-op parent, having captured the original visuals and some startlingly absorbing gameplay. Giant mid- and end-of-level aliens are on you before you're aware of what's happening, but sadly there's a pause as end-of-level aliens are loaded from disk before you can tackle them. This interrupts the action for a moment so make use of the spare time to wipe the sweat from your hands. It's the only respite you get.

Arcade visuals are traditionally pretty damned incredible and Dragon Breed boasts some of the best. Fortunately, the programmers have managed to replicate those graphics on the ST, turning this into one of the most graphically brilliant shoot-'em-ups around.

ST sound chip music accompanies play. Activision's product manager told Format that a sampled dragon roar is to be added, but this plan may change if it turns out that there just isn't enough disk space available.

After all is said and done, despite its technical excellence, Dragon Breed is not a wonderful game. It falls short not because of inadequate programming but because it's a poor arcade game to start with. Though the sprites are enormous and colourful, the levels are so short that you just don't have time to get involved in all the action.

Before you know where you are you're bashing the mid-level guardian, and mere moments after kissing goodbye to him, your next opponent is an enormous end-of-level alien. So long as you find the right place to stand, keep your finger vibrating on the Fire button and ensure your eyes are all over the place, you can wipe it out in no time.

A case of nice conversion, shame about the licence.

Though the sprites are enormous and colourful, the levels are so short that you just don't have time to get involved in all the action.