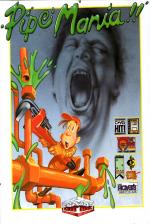 Winning formulas don't rocket onto the games scene with any regularity, but when they do they're around a long time - generating spin off after spin off. Remember Arkanoid? It was just a modification of Breakout but we've been seeing clones of it for years. There's been nothing since which gamesters could go psycho over, but programming team Assembly Line are hoping that's all about to change when Pipe Mania hits the shelves.

The game's history has been notoriously rocky. It was first shown to the press last February and has been lurking on the horizon ever since. In the last year it's undergone three name changes from Pipeline to Pipe Dream and now to Pipe Mania, but it didn't find terra firma until American publishers Lucasfilm expressed an interest. They've now stitched up distribution of the game in the States under the name of Pipe Dream and much of the game's delay stems from their suggestions on how it should look.

Pipe Mania's big boast isn't incomparable graphics or ear-splitting sound, but intensely addictive gameplay. Just like Arkanoid, the objective is brazenly simple: to piece together sections of pipe so that water can flow through. This might not sound exciting enough to give you palpitations - but wait until you play it!

The game starts with a single piece of piping. Using sections of pipe, in the order they're displayed on the side of the screen, your task is to place them in such a way that water can flow through unhindered. You only have a one minute head start before water starts flowing, but you can continue laying pipe until it reaches the very last piece.

The game becomes complicated because you can only use the next piece of piping displayed on the side of the screen. Skill and foresight is needed to plan a route; the trick is not to necessarily lay pipe consecutively. If you're not careful you can easily end up with your plan in tatters just hoping the correct angle or strip will appear in time for you to join your pieces together.

A wealth of extra features emerge as the game proceeds: squares in which you cannot lay pipe, reservoirs that slow the flow of water and complicated one-way pipe systems that only allow water to flow in the direction of the arrow on the pipe - if you lay one piece round the wrong way, the water stops and the game is over.

There's no way of linking the pipe in a big circle and leaning back in the knowledge that you've won a level. Instead, you need to lay a certain number of pieces each time to qualify for the next level. In between every level you receive a password which saves you the tedium of replaying easy screens.

There are also extra bonus screens played in a similar vein to Tetris. Chunks of pipe move back and forth across the top of the screen and you drop them on top of each other, constructing a clear pipeline. This is exceptionally difficult because you're given just seconds to decide where the pipe should go and it only takes a single wrong move to make the whole level impossible to complete.

This type of game has limited graphic possibilities. There's no fancy animation and horizontal-scrolling might never have been invented. The backdrops are colourful, although in some cases it's difficult to distinguish the pipe from the background.

The music only uses the ST's sound chip and would be far more appropriate providing a soporific background to a cutesy game than this heroic pipe-laying struggle. You'll soon be reached for the cotton wool or the volume control.

The reason for Pipe Mania's delayed release was Lucasfilm's insistence on changing the visual aspects of the game; even from the introductory screen you can spot their influence. Pipe Mania has a very polished, slick, American feel to it and this goes a long way towards convincing you that it's value for money.

There's no escaping the game's simplicity. Let's fact it, Arkanoid was no more than a brainless challenge and the only real difference between the two is that Pipe Mania has lost the shabby homebrew feel and blinds you with polish.

But however straightforward Pipe Mania might be, there's no denying that it's one of the most addictive games on the market. If you're not looking for something deep and thoughtful, you'll sprout roots in your chair before you stop playing this one.

One of the most addictive games on the market.