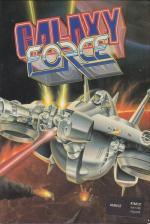 Last Christmas (bah humbug) Activision released Afterburner to a generally ho-hum type reception. Now they're taking on a much harder challenge. There was a lot more to the Galaxy Force coin-op in the arcades than there ever was in After Burner, so have programming skills advanced enough to present a fully playable and addictive conversion?

Galaxy Force is set in an outer space gripped by constant wars. Your job is to fly, guns ablazing, through one level after another, defeating the giant fortress at the end of each.

The game is split into five levels which see you exploring space, land, sea and even gruelling caverns in your quest to reach the fortress at the end. At the start of a game you can choose which of these to begin at, and then you fight your way through the cannon-fodder bad guys at the start to the real toughies you encounter in the fortress. When you've completed all five levels you go on to the sixth and most gruelling level. In this one you race through tunnels and construction sites in what is undoubtedly the game's most difficult section.

Each level is crawling with enemy ships and you use either your missiles or laser guns to defeat them. In fact, your only break from giving the Fire button some severe grief comes in between levels.

The fortress at the end of the level is like a massive space city and flying through it means following a long winding main corridor. Seeing the fortress loom up ahead and then drawing closer and closer, you get the uncomfortable feeling of something sinister about to approach. Get inside and you start to discover exactly why you were worrying.

You observe your craft from behind and use the joystick to manoeuvre it up and down or to turn. The only time your joystick skills are put to the test is when you enter the end-of-level fortress, where you need to be careful to prevent damage to your craft and still find time to shoot the odd missile.

The backdrops and sprites have been drawn well, but it's the scenes of rapid movement which matter most. The enlarging view of the fortress and your journey through this is one of the most appealing, and is heightened by some very effective and fast routines. Movement of your craft has also been very well thought out. As a result you can tilt forward, backwards and to the sides very quickly indeed - all accompnied by great graphics.

You can toggle between music and sound effects, and with both going you can really start to feel like you're back in the arcades.

Well, have Activision got this one right? You'd certainly be hard-pressed to put your hand on your wallet and answer a categoric "Yes". Galaxy Force has its high spots, which are more frequent than you might expect. The graphics are fast and brilliant, and when you see the fortress looming up there's nothing to take away the excitement of preparing for it.

Unfortunately the game doesn't respond to movements of the joystick as fast as it should, particularly in the fortress, where you need to make crucial decisions about movements left or right. The action slows down when there's a lot on-screen too.

There's also no escaping the jerky shifts of some of the larger sprites, which makes the game confusing and clumsy.

Galaxy Force is great fun for half an hour. If you're into mindless blasting you'll have a whale of a time, but it lacks the challenging gameplay which is rapidly becoming crucial to 16-bit games. Gone are the days when a game could succeed solely on the "Wow!" factor.

If you're into mindless blasting you'll have a whale of a time, but it lacks the challenging gameplay which is rapidly becoming crucial to 16-bit games.