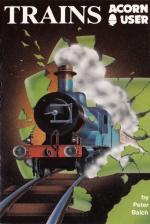 Today's commercial game, tomorrow's magazine game one tends to think - only here it's the other way about. Micrograf are marketing the Trains game published some while ago in Acorn User. To be fair, the game was well above normal magazine standards at the time it was published.

I already had the magazine version somewhere in my collection and the only additions that I could detect were actually most unwelcome. First, there is a "text" page at the start composed in agonisingly slow graphics which serves only to delay loading. Second, Micrograf have placed heavy protection on the listings, even to the extent of that extreme of protection nasties - intercepting the Break vector to force you to switch the machine off after play!

To what end, I cannot fathom. The program transferred to disc by LOAD and SAVE provided I did not try to LIST, so it doesn't even prevent copying! Perhaps they are trying to sell back issues of the magazine which reveals all?

The game itself is original, entertaining and very frustrating! A Mode 1 screen display of five stations, connected by a tangled web of tracks and points, is generated with random variation for each play. Trains must be persuaded to transport passengers from station to station using just three keys: one to change points in front of train, one to start and stop a train and one to change the train under current control.

I actually find the game fiendishly difficult to play, especially when there is more than one train moving around at once. If you do well enough there can be up to four on the move - so I'm told. I have to console myself with the entertaining visual and sound effects that accompany my frequent crashes.

Considering the general rise in program standards, Trains actually stands up quite well to the current opposition, mainly due to its originality.

Considering the general rise in program standards, Trains actually stands up quite well to the current opposition, mainly due to its originality.