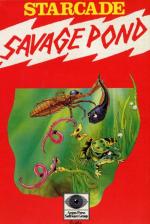 The worlds of Pacman and the Space Invaders are far removed from everyday experience, while although frogs do cross roads, it is not usually via five lanes of speeding traffic in order to reach a polluted river!

This program, however, is very much set down to earth. In fact, in the depths of your local pond. Many of us collected frogspawn in our youth, and scarcely imagined the awful deadly struggle which those tadpoles would have faced.

Yes, the hero of this game is the humble tadpole of the Common Frog (Rana Temporaria), which faces an uphill struggle to survive and eventually become a frog. It is perhaps a good job that you came along to help in this desperate fight. There are many foes, including hydra, dragonflies, jellyfish and even mutant bumble-bees!

However, all is not gloom as there are plentiful quantities of a variety of goodies to eat, including amoeba, dragonful larvae and (yum, yum) bloodworms. As these appear in, or drop through the water, you can assist the tadpole by the standard Z, X, *, ? configuration of keys. Movement in one direction continues until another key is pressed, which makes for very smooth movements.

As one screen of amoeba is devoured, more and more problems appear to haunt poor taddie, including ferocious dragonfly nymphs, jellyfish and even radioactive waste from a dumper truck! Yes, how true to life this program might be...

Survival as a tadpole brings its own reward, as there would be no tadpoles if the frogs didn't celebrate! C'est la vie...