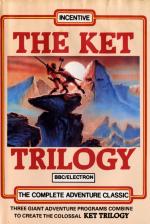 The Ket Trilogy is a set of conventional text only games running in Mode 6. At the time of writing, it is available on tape only, although I understand a disk version is to be released shortly. At £9.95 for three games, it looks to be good value for money, the multi-game format providing an alternative solution to the demand for larger games than the disk access used in games discussed earlier.

The three games can be played independently but form a logical sequence carrying the same storyline through. The background is that the Lords of Ket have sent for you to put a stop to vicious attacks coming from beyond the mountains to the east, organised by Mad Monks and a beautiful High Priestess. You have little choice but to accept the mission, as you will otherwise be executed for a murder you didn't commit. With me so far?

In the first game - The Mountains Of Ket - you have to reach the far side of the mountains, which involves finding the secret route to its entrance and then coping with the horrors inside. This takes you to the Temple Of Vran - the second game - in which you have to destroy its evil occupants including the beautiful and evil priestess Delphia. The final game takes place in the inner sanctum of the Temple and involves a confrontation with the even more evil Vran Verusbel, leader of the Mad Monks.

Actually, I got most of this from the documentation because I have so far not completed the first game (I haven't stopped playing, just hit another deadline). I have got quite a long way with it though and can comment on the general style of the games. The parser is two word, and the descriptions on the brief side. Puzzles are of reasonable quality, and I had quite a lot of fun finding ways to buy things in the village at the outset to set me on my way. The Ket games also involve combat which, though popular with some, is not my favourite style of game, because this always seem to bring in too much of a chance element and the fights can get boringly repetitious. The only reason that I have found is tolerable so far in Ket is that one can seem to get through most puzzles avoiding combat, and indeed it may be wise to do so.

For those of you who like to pick fights rather than avoid them, a brief description of the Ket style is in order. You start off with points for Prowess, Energy and Luck. On entering combat, the equivalent points for your opponent are also shown. Prowess points are fixed, but the ratio of yours to your adversary's determines your chance of making a hit. Energy is lost as blows are scored and a zero score results in premature demise for you or your opponent. Sources of nourishment to renew energy appear limited and time alone does not replenish. Luck points are used up by trying to dodge opponents' blows and do not seem to get replaced either. Fortunately, the author has provided for cowards as well as heroes and you are given opportunities to run away during combat!

Have you noticed that all adventure games these days are hyped as 'massive' or some such? The Ket Trilogy describes itself as 'colossal'. The only game which could justify such adjectives is Robico's disk-based Enthar Seven, after which Pirate's Peril is probably as large as any in terms of text. The most massive games in terms of puzzles packed in are those of Level 9 in spite of their all-in-memory design. This said, The Ket Trilogy is significantly larger than normal, being three Electron-sized games for a price often asked for just one. It's not the best game I have seen by a long way, but it is perfectly playable and can be safely recommended as good value for money.

It's not the best game I have seen by a long way, but it is perfectly playable and can be safely recommended as good value for money.
Logout