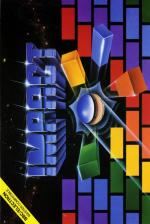 Hailed by Audiogenic and programmer Gary Partis as "the game that would knock the smile off those who thought Arkanoid was tops", this is a little disappointing. Admittedly I'm not reviewing the final version but certainly what you see will not be too different.

Like Arkanoid, the game is a derivative of the old favourite Breakout: you direct a movable bat to bounce a ball into various patterns of bricks to clear screens - but with some extra twists on the Arkanoid version - namely a scrolling space background, rather more screens (80 built-in), an editor which allows you to design up to 48 more and an advancement of the earlier game's token system. Here you can use the tokens to buy more powerful weapons from an icon display or else save them for bonus scores at the end of each level.

The game is colourful, fast, noisy and addictive as you would expect. However, I think that the trade off of poorer graphics for more options and screens makes this a weaker game. Part of the instant appeal of Arkanoid is the sheer first class look of it - deprived of that gloss the game is still fun and addictive but not quite as special.

The built-in editor is easy to use with keyboard control and, with the inclusion of level codes, you can redesign any of Gary's screens to make them easier.

Standing on its own, this is superb and an excellent addition to your software library. If you already have Arkanoid then might I suggest that you try to have a look at this in action before you buy it too! I can see exactly why Audiogenic think this is a better game (and many games players will agree with them), but I can't help feeling that tied to such a rigid conversion structure Partis' natural wild talent has come under a bit too much control. It all seems a bit too tame somehow - certainly it has none of the nerve-screaming speed of Syncron or Psycastria that made those games so exciting to play.

A bit clinical, a bit too calculated to appeal to too many people. A great programming job, though, and on the proposed Archie version it should be a riot of noise, colour and speed. Still a lot of fun and excitement, however, and no question that it deserves it Game of the Month status - even in a month with rather more competition than this one!

Standing on its own, this is superb and an excellent addition to your software library.