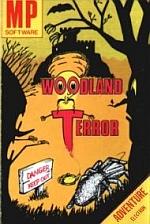 MP Software has produced the sequel to Firienwood, their first attempt at an adventure for the Electron. Though it is set in roughly the same scenery as its predecessor, Woodland Terror may be played without having either attempted or solved Firienwood.

In the first adventure of the series, a genie was released from the magic lamp. This evil being is now terrorising the locals and it is your task to find the lamp and re-imprison the genie.

The adventure is technically very good. The response to input is fast and the descriptions of the locations are excellent. Coupled with a very quick load and save-game facility there is little to complain about from initial impressions. However I felt uncomfortable during the game due to the random element that MP introduced to the play in the form of ferocious goblins and greedy vultures that might attempt to kill on sight.

Too many software houses have jumped onto the "independent characters living their own lives" bandwagon and not dealt with it fully. I'm afraid that MP have paid lip service to this "feature" and made it repetitive without adding interest to the adventure.

The vocabulary included is good, the verbs and names have been well chosen with imagination and I'm sure that therein lies the secret of how to finish this adventure. How do I get past the giant ant? The baby vulture? The evil Genie ...?

So far I have visited about 75 rooms but have yet to solve the adventure. Whilst I feel that I am close to the solution I have no idea how to go forward. (Does anyone know how to get out of the small room with the wizard's staff and hat?)