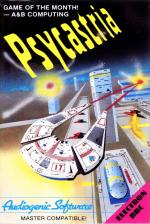 If ever a game leapt out of the screen at you and shouted 'quality', then this is it! It's not often I am totally bowled over by a programmer's complete control of the Beeb's graphic capabilities, but I am now.

What we have here is nothing less than a faithful hi-res copy of the Commodore 64 smash hit, Uridium. Yes, Uridium! If you make any sort of habit of reading computer magazines then you'll know the excitement this game has caused - known generally as one of the fastest, most difficult and challenging shoot-'em-ups around.

Somehow, programmer Gary Partis has managed to convert Andrew Braybrook's incredible original onto the BBC - the machine usually derided as not being suitable for games. Well, okay, I take the point, but any machine that can originate Elite (the first UK software to top the US charts), run a Knight Lore with more features than the Spectrum original and produce a game of this quality is worthy of any games player's or programmer's attention.

Partis, whose previous credits are Positron, Ultron and puzzles and BBC conversion for Dr. Who And The Mines Of Terror, apparently wrote Psycastria 'because he was fed up with the idle boasts of other machine owners'. Anyone who plays the game would agree that he has done a superb job.

So, to the game. The theme of Uridium is to defeat a series of dreadnought ships which are sucking all the metals from a series of sixteen planets. Psycastria changes the plot slightly and the battles of Commander Ronald Boggleswick range from land, sea, the moon, deep space and, finally, the great mothership.

Play is simple: just shoot the hell out of everything! The scrolling screens represent lines of offensive forces (a bit like a view down upon a very long aircraft carrier) that must be destroyed before moving to the next sequence. Although these just sit there waiting for your bullets, there are also obstructions to avoid (one death and it's back to the start) and a variety of alien fighters to dodge and shoot down, some immediately harmful and some just annoying.

Your spaceship responds left/right, up/down and firing (plus joystick) and the game has player options of up to four. Constant attention is required as your ship moves inexorably to the right and almost certain destruction by collision with part of the dreadnought's superstructure. Control of your ship needs to be acute to destroy tanks, surface installations, etc while still retaining manoueverability. Once each section is cleared you move onto a quick reaction firing section against fighters.

The graphics are truly superb - high detail, 3D effect with shadows giving vital clues about height and, whilst the moving fighters and your spaceship are a little basic in design, there is a welcome absence of screen flicker.

Fans of shoot-'em-ups will obviously want this, but I reckon that this could be the shoot-'em'up to convert the waverers amongst you. My only criticism is that there is no volume control in the game - excellent music (including an ace version of Cold Tea) and sound effects but they're not too popular at three in the morning when the compulsion for just one more game hits again. And it wll.

This is an essential game. State of the art, fast action, graphically superb, compulsive - what more do you want? Even our pre-production copy without game rules, etc, makes it all too easy to jump straight into the game and have a great deal of fun and excitement. I have rarely seen such quality of game design or instant playability on the Beeb and, with adequate promotion, this should leap straight to the top of the charts. Deservedly.