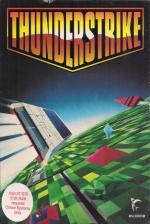 Two months ago Millenium released Resolution 101, a game with the fastest ST graphics ever. Not content t rest on their laurels, they've followed up with Thunderstrike, not only boasting faster graphics, but also a unique perspective on 3D environments. Mark Higham investigates this latest technical wizardry...

Setting a game in the distant future has two major advantages. For a start you can create completely original environments specifically suited to computers. Trees, for example, are a nightmare to simulate, so why not populate this new world with rectangles or prisms? You're also at liberty to come up with all sorts of unexpected scenarios, introduce weird craft and adopt strange control methods. Millennium game designers Brian Pollack and Tony Beckwith have exploited all these opportunities to the full in their brilliant new game, Thunderstrike.

The game is set in the 23rd Century. The Greenhouse effect has been eradicated, but other social problems have arisen. Football has become so boring that hooligans prefer to sit at home watching TV. This has resulted in incredibly violent TV game shows - and you're set to appear on the most vicious of themall, The Ground Defence Game.

The terrain is represented by a series of 3D plains used to shape the contours of valleys and hills. In the first level, three installations and two drone generators are positioned on the map ready for action.

The installations are shown as pyramids and the drones sit on top of them to steal their energy. You need to blast the drone before it takes all the energy. If you're not quick enough, the installation turns black, leaving you with one less to defend. The game ends if all your installations fall prey to drones.

To destroy the drone generators, you need to score five direct hits and then they sink into the ground. Drones circle round the generators and if you whack into them or stray into the path of their fire, you lose massive amounts of energy. Lose too much and you can kiss goodbye to your game. Luckily when you shoot some drones they explode, releasing bonus pods. If you're fast enough, you can pick them up, gaining extra power, energy or weapons.

As you advance through the levels, more installations need to be defended, the drones become more intelligent, and you have more generators to attack.

At any point in the game, you can hit F8 to show a terrain map. This pauses the action and shows you the position of generators and installations. Those that have been destroyed are blacked out. Tracks are also shown and you can land on these and cover ground at high-speed. The map is invaluable for working out your location in relation to items on screen.

Thunderstrike can be played in two modes; stippled and non-stippled. In non-stippled mode, the game moves fast, but the graphics don't look particularly three-dimensional. In the other mode, graphics are realistically detailed, but lose the incredible speed.

Still graphics have been designed by the same artist who worked on Ocean's Lost Patrol, and the detailed and effective visuals magically reinforce the TV atmosphere of the game.

The TV angle isn't just an add-on plot device. Besides inspiring a host of still screens, it's also an excuse for the original viewpoint. A TV camera follows your Thunderstrike everywhere, looking at the craft from all angles and presenting realistic TV coverage of your performance.

One of the challenges of the game is to constantly keep your craft in full view of the camera. Making fast moves, radical turns, or climbing too high can take the Thunderstrike out of sight, leaving it difficult to control. Sound effects blast out to let you know if your installations are under attack. There are also spot effects for collisions and explosions. A sickly but effective TV game tune plays throughout.

This game has astonishing effects. There isn't anything to match the fast 3D graphics and the exciting swings of the camera. The result is a thrilling game to play.

Getting used to the control method to pick up bonus armoury and manoeuvre around attacking drones, takes a while, but it's a dream to manipulate compared to Electronic Arts' Powerdrome, which featured the same kind of futuristic craft.

Progressing through the levels brings more and more complex assortments of aliens to obliterate. Although they certainly keep the game challenging and turn your trigger finger blue, there aren't enough variations to each level to make this a classic. Nevertheless, with such innovative graphics, it's certain to scale the software charts.

With such innovative graphics, this is certain to scale the software charts. However, there aren't enough variations to each level to make this a classic.