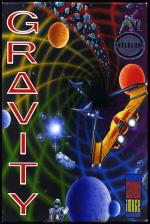 Gravity | Effects | Programming The Drones | A Trip To The Supermarket | Verdict

The last Imageworks game acclaimed for its originality was Interphase - not just a generic re-hash with a thin veneer of novelty but a fully-fledged forerunner of a totally new breed of game. Mirrorsoft's Gravity is in the same spearheading category, a strategy/action space game incorporating into its gameplay new theories about black holes and space travel.

The game is set in the year 2320, after space travel experimentation has discovered the ultimate way to move. It's been discovered that if an object is dropped into a black hole, it continues in a straight line at infinite velocity until it reaches a second black hole, where it emerges with zero time elapsed.

This theory has allowed humanity to venture into Outer Space and colonise planets. Unfortunately, conflict developed when one of the populated planets was turned into a black hole by an Outie (a coloniser) looking for a quick short-cut through space.

Your role in the game is to continue the process of terraforming and colonising space and to find and harass the Outies whenever you can.

Gravity is played on a scrolling isometric space grid. The grid delineates the spatial dimensions and the field of gravitational forces. All the planets and black holes are represented by detailed sprites which affect the grid. Newton makes a guest appearance because spacecraft react to the gravitational influence of the planets and black holes in accordance with the laws of Newtonian mechanics.

You equip your spacecraft to take on this challenge, remembering that different missions and different situations require different types of equipment. Some of the equipment can be purchased in Outer Space but the majority are best obtained by returning to your colony. Since you'll need to return home to receive fresh orders, it's sensible to wait until then.

The game can be played in two ways; either with you controlling the strategy element, deciding where to do and what to do, or with the colony controlling it. If you take command, you give missions and destinations to up to eight spacecraft, taking personal control of one of them. There are five missions which can be given:

1. Exploration A trip to a particular system to discover if it's occupied by Outies and to see the size and type of planet.

3. Military Action Either chasing and destroying Outie craft in the Outie occupied system, or removing the Outie presence altogether by converting a black hole back into a sun.

4. Colony Protection Protecting a convoy of people as they colonise a planet and set up its defence systems.

5. Route Construction Generating a black hole to establish a new route in space.

It's important to colonise as many planets as possible because colonised planets are key places in the system. They enable you to restock supplies and communicate with other craft. Although you may lose your colonies to the Outies, you must not lose your main base, known as Starcom.

Once you've generated a colony somewhere, it continues to develop without your interference. The longer it survives, the more useful it becomes to you. All the planets have a technology (or Tech) level which increases with time and enables you to purchase more and more stock to re-equip your spacecraft without returning home. It's only back at Starcom, though, that you'll be able to purchase the full range of equipment.

Using drones is the easiest way to confuse and destroy Outie craft. Drones are equipped with eight of their own special program, but you can also prorgam them yourself. This makes it possible to send them into space, patrolling designated territory, and use their lasers or nova guns to hassle the Outies and prevent their imperialist encroachment.

A simple programming language needs to be understood before you can fully utilise the drones. This language consists of icons employed in a flow diagram. The drone follows the instructions and responds to the Outies with the programmed results. One of the standard programs found in the game runs as follows:

label1: if no Outies are detected then hold station goto label1 else attack until Outies destroyed goto label1

Gravity is intended to be played initially as a strategy/arcade game with the computer handling yuor missions. As you become more adept at manipulating the controls though, you can take over the process of giving out orders and start to develop your own strategy, dispatching your own forays off into the Milky Way.

Your spacecraft can be moved using the mouse or joystick - but the keyboard gives the finest control.

The electrifying strategic nature of Gravity means that it's gameplay which matters here and not graphics. Consequently, you don't switch on your machine and expect to be assaulted by great visuals. But this is exactly what happens.

Original games are often renowned for having something special in their graphics. Those elements in both Virus and Interphase which made it so exciting stemmed from the graphics. The same happens here, due largely to the grid. This gives a perfect impression of the gravitational field with lines which carefully weave their way around planets and into black holes and still hurtle along when the going gets tough.

Besides the grid, there are rousing static sprites of the planets and an animated view of your own spaceship. These again give some prodigiously realistic views to the point that you even find yourself picking out familiar planets. In no time, you'll be screeching: "Wasn't that Saturn we just passed?" and waving affectionately.

The visuals are the work of graphic artist, Pete Lyon. He's responsible for drawing sprites and designing the front screen containing all the icons. Sound effects are as polished as the graphics but there's little more than warning tones and the occasional blast.

If the drones are used efficiently they can provide enormous amounts of useful information, as well as ridding the solar system of alien presence.

The drones come equipped with several standard programs, such as free-fly and Interdict. Theese programs are available to be edited but the real power of the drones can only be exploited once you try programming them yourself.

To program a drone, drag icons from the bottom of the screen, into the programming window. Various connectors appear, allowing you to link the icons together. The most important icons are the Orbit and Approach commands. These instruct the drone to find a certain area and stay there. Using the IF icon, you can make the drone respond to a given situation.

As you progress, you can start buying add-ons like the black globe. Once you put the globe on you're unable to change direction - but that's a very small price to pay for invincibility!

If you're visiting colonised planets supplies should be available, but certain items will not be in store until the colony has had time to fully develop and achieve a high enough tech level. Fortunately, all the items are also on sale back at Starcom. It's usually easier to go home and buy things unless you've let the enemy through to your own colony.

It takes a while to get to grips with Gravity but it's well worth the effort. The moment you start understanding how it works, you get involved in the action to the point that you daren't blink for fear of losing sight of the Outies. Thankfully, an easily digestible manual means you don't spend hours suffering at their hands before you come up with a winning formula.

Originality is now high on the list of the big 16-bit boys, so we may be seeing the end of routine and unimaginative imitations and the birth of a new market for programmers with ideas. Gravity is just the beginning.

Gravity | Effects | Programming The Drones | A Trip To The Supermarket | Verdict

This is a complex game, and it takes a while to get to grips with. It's well worth the effort though... and we may well be seeing the birth of a new market for programmers with ideas.