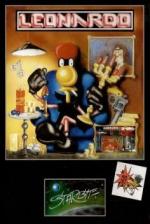 Every now and again an incredibly simple game comes out which is endowed with all the style of a council estate but has an addictiveness factor that shoots through the roof. The last game on the ST to follow this route was Skweek from Loriciel, but now Leonardo has stepped into the limelight.

You play the role of the title character who's a compulsive thief. The challenge area consists of 50 different levels in which the point is to pick up as much money as possible. To move onto the next level you need to push three similar items into a row. If you come across the key icon, then you advance immediately to a bonus level where you must push three chains of pearls into a row by kicking them along. The key is just one icon, others to be found across the maze affect the outcome of your trip.

For example, wads of money are there to be collected. Then there are the occasional paralysing rocks which can halt the movement of the ghost and watchman and even sticks of dynamite can be tracked down.

Kicking is the only way to move anything in this game. Boulders can be shunted along with a kick until their path is obstructed then a kick will destroy them. Other objects cannot be destroyed.

The ghost and watchman chase you around the maze most of the time. Although they can't be killed, they can be sent back to the watchtower by flattening them with an object. The watch-tower is one small area of the level where the ghost and watchman kip down for the night. On some mazes you can block it in with the boulders and then kick something over the mischievious pair to force them to return to the watchtower. With a boulder in front they won't be able to escape, giving you free reign of the level.

Leonardo will hardly go down as a masterpiece in terms of its graphical qualities. There's little being achieved within the actual gameplay that couldn't have been done on an 8-bit machine. However, as you can see from the screenshots, the sprites are detailed and large. Even with four-directional scrolling, they move around fast enough to keep the game addictive.

Unfortunately, sound is limited to a tedious range of ridiculous spot-effects.

What is most annoying about this game is the ease with which you can set up an arragement of items almost in a row, but from which it's not possible to win the level. Just kicking two items into corners will mean that you'll lose the game because it's impossibe to kick an object out of a corner.

This element alone stops it from being the sort of childish game you pull out for a bit of brainless entertainment. You need to be able to remember how the screen is drawn up to work out what the best way of kicking the three items into line is. If you mess up the planning then you'll lose the game.

Leonardo is a fun game to play, especially with the added strategy element. But it is nothing more than that. It isn't the kind of game that you pull out to impress a girl at a party with the brightest and best graphics ever but nevertheless it does have a highly addictive gameplay.