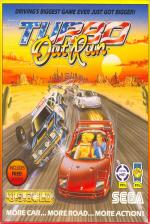 OutRun is back and it's been given a new name - Turbo OutRun. Turbo is the Capcom follow-up which treads the same ground as its parent but with improved roadside sprites and extra speed.

Squeezing even more speed out of the car game has been Probe's aim and they had a lot of experience to draw on because they wrote the original OutRun.

The objective of Turbo OutRun is the same as it's always been - to race through one level after another towards an elusive city. Each level you pass through greets you with different roadside sprites and more and more vehicles to negotiate. The road is as wide as it was in OutTun in most places so it should be easy enough to get to your intended location, but unfortunately you'll find so many other cars on the road that getting past them can be a serious problem.

Complicating matters in this version is the turbo mode. Hit the spacebar during play and your boosters are fired, taking you across the tarmac at a phenomenal speed. This can often be the difference between getting to the end of a level in time or perishing at the hands of the clock. Unfortuntely, if you're speeding too fast for too long then you start getting engine trouble. Overheating can occur if you forget to switch the turbo motors off, but you're unlikely to do this since you'll probably be defeated by a corner long before you get too far. At speeds like this, it's almost impossible to keep to the track as you sail round even the smoothest corners.

There's a certain gloss to Turbo OutRun which shines instantly from the quality graphics. There are no unusual course effects and as a result the emphasis has been on making the roadside sprites and other vehicles hurtle along at a startling rate. Not only do they move fast, they're also incredibly smooth. You meet countless varieties of cars along the way and roadside sprites are so numerous that the game is played on three disks.

Some of the more interesting effects include passing under extremely long or low bridges. Here, the ordinary roadside sprites are replaced with representations of the side of the bridge and these move at super fast speeds.

Although sound effects still use the sound chip, they're actually not too bad. A reasonable rendition of the coin-op music plays constantly and sound effects such as crashing and clipping other vehicles are overlaid. There's an option to switch off the music and just have the sound effects which helps you keep your mind on the track.

There's no denying that this version of OutRun is an enormous improvement on US Gold's last attempt but how does it stack up against the rest? Car games have progressed so that we now have the whacky courses of Power Drift, and the 3D routines of Hard Drivin'.

Turbo OutRun consequently comes across as being very dated. It isn't that it doesn't move smoothly and fast enough because it does, but in the two years since OutRun we've seen similar racing games striving for the same thing.

Turbo OutRun is a lot of fun to play if you were impressed by the arcade machine or if you just want to slam your foot to the ground and race round at top speed. As a conversion, it has been done very well. The game has captured the spirit and pace of its coin-op parent - but even that was an unoriginal and tiresome game. Take away the steering wheel and great sound effects of the coin-op and you're not left with anything particularly thrilling.

The game has captured the spirit and pace of its coin-op parent - but even that was an unoriginal and tiresome game.